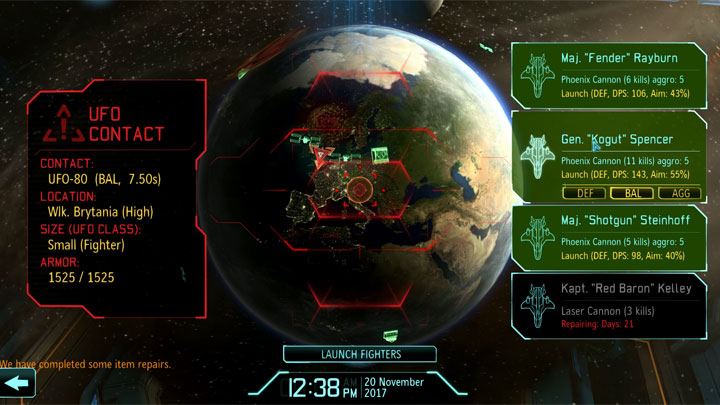 Squadron Unleashed (for Long War) is a mod for XCOM: Enemy Within, created by szmind.

Description (in author’s own words)

Aircombat revolution comes with sending multiple interceptors at once, sending partially damaged jets, implementing quasi-formation management and making pilot rank mean a little more than just a badge. All of this and even more will work with your ongoing LW campaigns so just grab it and unleash the power of squadron. Works with LW and its mods.

Welcome to the air-revolution, commanders! First of all, this mod is heavily customizable so if you do not agree with anything that has been implemented just customize it to your liking during installation or later on using the configurator patch-file. I do not claim this mod to be balanced cause balance heavily depends on what mod you are playing. I spent like 200 hours learning how to mod stuff and coding it with not much time to test 'balance issues'. You can have any air-stats configuration and I do not intend to change it. The mod is supposed to add variety, fun and freedom. You can configure it to be tougher or easier than one-on-one dodge fights based on your individual tests, experience and challenge you seek.

Generally maths prove that attack as squadron yields c.a. 2,5 x more damage output than sending the same number of jets one by one. Reworked UFO stances are supposed to balance it - AGG by doubling UFO firepower (so 2x vs 2,5x), while DEF by cutting contact time by 1/3 (so 2,5x cut to 1,6x). Additionally aggresive UFO is supposed to encourage you to stay DEF yourself (further cutting squadron firepower) while evasive UFO encourages AGG stance increasing your jets vulnerability.

First thanks go to my wife who let me work on this for almost 2 months without a word of complaint on wasting precious time for some computer stuff :)

Firaxis - yep, no mistake. They coded everything ready for old-XCOM style interceptions. Just abandoned the idea on some stage, but all the code was there; waiting for me :) I just made use of every piece of useful code and turned not useful into useful :)

klipper88 - huge thanks for MAC tests and perfect bug report

Noganeto1 for help with Spanish localization

GamerChris for inspiration on UFO stances being related to battle speed

And last but not least

1. You can toggle out a jet with Y/triangle button or TAB key (keyboard).

2. You can launch jets without scrolling to launch button using X/square button.

3. You can still launch jets by scrolling down to launch button and pressing A/cross button or space/enter (keyboard)

This is one of the first things that Firaxis introduced and I just made use of it. It has been always calculated but has no use for 1 ship. The basic formula is:

Weapon levels are as follows

As Cannon's level 1 does not correspond with its power I coded it to generate aggro 7 (above Avalanche and below Laser). I enclose little XLS file to play and simulate aggro for different configurations, if you like.

1. Click on a jet to toggle in. Click again to toggle out. You do not need to click small stance button. You can click large ship card and then select stance. Size of squadron depends on the rank of best pilot in the squadron.

2. You will get info (from Shen :) heh) about expected average DPS (damage per second) and %Aim of the fighter against that specific UFO.

3. As soon as you hover mouse over another ship or over launch button the list of selected ships is sorted in decreasing order of AGGRO stat.

4. Ship with the highest aggro is the leader. UFO will attack him first.

5. If you put all ships on the same aggro then the leader will be picked randomly.

6. You can select partially damaged ship (>50% HP by default). A damaged ship suffers aim penalty (-25 by default), cannot activate modules and has 20% penalty to speed (probably slowing down the whole squadron).

7. A damaged ship that can be sent has its status in orange not red. It must be refuelled first. Refuelling is automatic as soon as ship is repaired to 50% (customizable threshold).

9. Squadron flies to destination with unanimous geoscape speed. That is the speed of slowest jet in squadron.

1. At start of combat name of leader, its stance and weapon will be displayed.

2. UFO stance will be presented as well.

2. Rest of ships are presented by name, ship icon and HP bar in order of aggro (same as prior to launching). They are called supporting ships. All ships are firing (see their projectiles), but there is only one jet visible to represent whole squadron.

3. Modules are activated by current leader so their availability depends on his stance. Activate modules normally.

4. Clicking on Abort button withdraws current leader and replaces him with next ship in line (if there is any still fighting)

5. Supporting ships take care of themselves and auto-withdraw when below 25% HP (customizable threshold)

6. A ship that was sent damaged (and suffers additional penalties) has its weapon/stance label marked orange.

7. I have lowered the crit damage multiplier from 2.0 to 1.5 of normal-hit damage to smooth RNG a little (customizable).

6. Chance to hit large UFOs (size of Terror/Supply and larger) is increased by +15 (customizable).

10. The above are all customizable parameters.

11. For more stance consequences for jets see below.

CROWD IN THE AIR AND QUASI-FORMATIONS

2. When UFO misses the missed bullet is considered 'lone bullet'. It missed the leader but it can hit supporting ships!

3. Supporters on BAL stance have 20% chance to be hit by a lone bullet (customizable).

4. Supporters on AGG have 40% chance to be hit by a lone bullet (customizable).

5. The above is supposed to discourage sending large AGG squadron against puny Scout and returning without scratch.

6. Lone bullets deal only 80% of regular damage on default (customizable though) and cannot crit.

7. Supporters on DEF are safe from lone bullets (hard coded).

1. If UFO is defeated the 'kill' is granted to the last leader.

2. BUT: UFO destruction chance is based on the weapon which fired the killing bullet - not the weapon of last leader. The bullet is marked!

3. Therefore: if you want to manage kill-granting concentrate on leader; if you care about non-destruction of UFO manage your squadron with skill :)

5. You will get individual battle report for every ship. If a pilot is promoted you will be informed of his new rank and size of squadron that he can now command.

6. ...cause max size of squadron depends on the highest rank of pilot selected for the interception.

7. Ships fly back to base at their own geoscape speed - damaged ships return with 80% of their speed. So you can see a nice string of up to 4 jets returning to base :)

8. Ships that returned with more than 50% HP will be scheduled for refuelling first - then for repairs.

9. Refuelling time has been increased to 6 hours (hard coded) to prevent reengagement. RPG-wise consider it as 'refuelling, quick service and ammo replenishing'.

Modules are activated by the current leader depending on its stance and cannot be carried over to the next leader. Therefore:

Aiming module - will work only for shots of the leader, not supporters. It expires as soon as you switch the leader.

Dodge module - will work only for leader, but dodged bullet does not turn into a lone bullet so it is a final miss. It expires as soon as you change the leader.

Tracking module - is the only one that carries over. It does not expire on leader's change

There is still the limit of 1 charge of a module per battle, not per ship. But you can activate Aiming with AGG leader, then switch to DEF supporter, who can activate Dodging as a new leader.

Lone bullet is still one bullet. It will hit only one target. Supporters with BAL/AGG stance roll for being hit in order of aggro or saying it differently - in order they appear in the formation. Therefore ships just behind the leader roll first. Not because they stay in direct line behind the leader but because AGG is considered 'staying close to leader' or 'staying close to UFO'. The further a ship in the formation (so further from leader) the lower the chance that it will have to roll for being hit - cause the bullet probably has already hit someone else. Though if everybody is on DEF and the last ship is on BAL, all lone bullets will come after him (but with only 20% to hit).

As mentioned in basics max size of squadron depends on a pilot with highest rank among those selected for interception. It does not matter if he is the leader or a supporter. If he turns out to be a supporter you can consider him RPG-wise 'a veteran training the less experienced' :) You will also learn shortly the dependance - each officer rank allows a pilot to command a squadron of +1 jet. So Leutenant can command 2, Captain 3 etc. up to 6 jets at Commander.

You might consider the following ideas enabled by configurator:

3. Set AutoAbortThreshold at 0.0 to disable auto-escape of supporting ships. Or set it at say 0.50-0.60 to minimize the chance of supporter being one-shot killed (large UFOs can punch you for 50-70% with single shot without warning :) Or even better - you can use the configurator to manage your settings throught campaign! Consider it as commander's tool. In early game you might wish to disable auto-abort of supporters, while in late-game set it to 0.60 cause you mainly fight large UFO's then.

4. UFO Interception Tweak is a great feature - bless SpazmoJones for the idea. It allows for longer fights with lower damage - smoothing the overall RNG impact. It also compensates for lower impact of modules by increasing number of available effects (e.g. 3 dodges/hits with Spazmofactor at 1.5 or 4 dodges/hits with factor at 2.0; for my tests I was even using 3.0 to make fights against Scouts longer). Beware though - game records only 60 s of shooting. If you go beyond that then at 60s ships will stop firing :) Is it moddable? Of course, but who would like to sit for >60 s watching. Oh, wait - we all used to do so with one-on-one interceptions spliting it into 4 x 20 s + flight time :))

This still means that even a small overkill translates into small chance of destruction.

Therefore you can also set a minimum %threshold of overkill above which the chance starts occuring at all.

The threshold translates into percent chance that must be accumulated before any further %chance is applied at all.

So for example setting threshold at 20 means that if chance of destruction is < 20% UFO crashes without checking the chance.