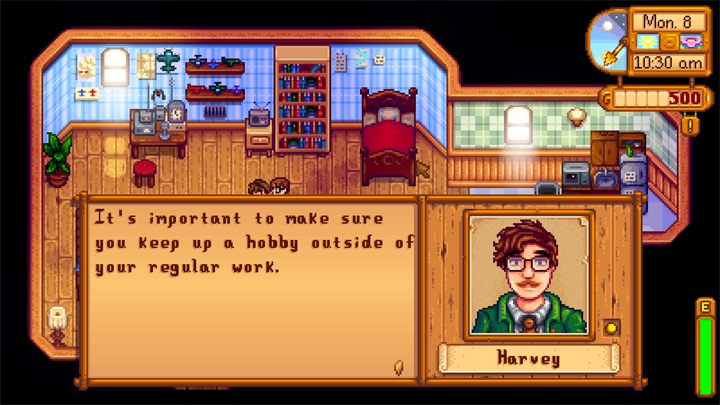 Canon-Friendly Dialogue Expansion for All Friend-able Characters is a mod for Stardew Valley, created by Ben i ParadigmNoma.

Adds about 1800 new lines of dialogue across all 33 characters who have a heart level. Now for Content Patcher

What's in this dialogue expansion mod?

-NEW IN 1.1: There are also about 280 new dialogue messages for festivals.

Year 2: Almost all characters have a new line in the eight main festivals.

Year 3 and beyond: There is a mix of brand-new dialogue and already-used dialogue.

(The night market is not included as of this version.)

What can I expect, specifically, in these new lines of dialogue?

-See for yourself if you'd like: The readme in the Docs tab contains the full script of all standard day-to-day dialogue, old and new. Dialogue is sorted by character, alphabetically. Skim through it to see if my writing style is to your liking. (Spoilers, obviously.)

-A slight majority of the new lines are for bachelors and bachelorettes, but minor characters also see their number of lines double, triple, or quadruple.

-Much of the dialogue is the same at the start, when all characters are at zero hearts. As their heart levels rise in increments of 2, characters tend to open up more often and become more personal, vulnerable, and/or philosophical.

-Dialogue possibilities also frequently change with the season, as with vanilla, but this is more likely to happen than before.

-There are a dozen or so new multiple choice dialogue prompts.

-There is new day-before-festival dialogue for many characters (but not in excess).

-Most characters have unique messages to acknowledge new year's eve and new year's day, instead of just treating it like another ordinary day.

-Almost all characters who had rainy day dialogue now have a 50/50 chance at one of two possible rainy day lines, instead of just one. Due to the coding, I had to make some minor edits, condensing some of these messages from two dialogue boxes to just one. This was a small change that had to be made for the sake of better dialogue variety. (There is also only a 50% chance that rainy day dialogue triggers at all when it rains, unchanged from vanilla.)

-There is no new marriage dialogue, and I have no plans to add it. Sorry. I might reconsider if demand becomes high enough.

-My writing style is as close to ConcernedApe's as I could make it. I avoid contradictions with the game's established canon like the plague. Creative additions to characters are based on logical possibilities that use the canon as a starting point. For example, in this mod, Vincent says his favorite flavor of ice cream is mint chip, because A) he likes receiving ice cream as a gift, B) mint chip is a popular flavor IRL that associates well with his peppy personality, and C) there's nothing in the canon that contradicts this. This is a typical example of how far I take liberties with the game's original text (i. e. not too terribly far).

-All new content is SFW. Subject material and language are at the same "PG" level as vanilla. (i. e. hell and damn are the worst the language gets and are still rare.)

What kinds of technical info should I know?

-As far as I've tested, it should be fully compatible in multiplayer, even if only one player has this mod installed, while others do not. (Players without the mod would not see the new dialogue, of course, but there should be no additional performance bugs that result from having this mod installed in a multiplayer game.)

-Content Patcher version is compatible with all other Content Patcher dialogue mods. Exceptions are if two mods add/replace/modify the same date. Ex. Two mods want to change Shane's winter_4 dialogue. The mod that is loaded last will be the one you'll see in game.

How do I install?

1. Download and unzip this mod. You should see a folder titled [CP] Stardew Valley Dialogue Expansion.