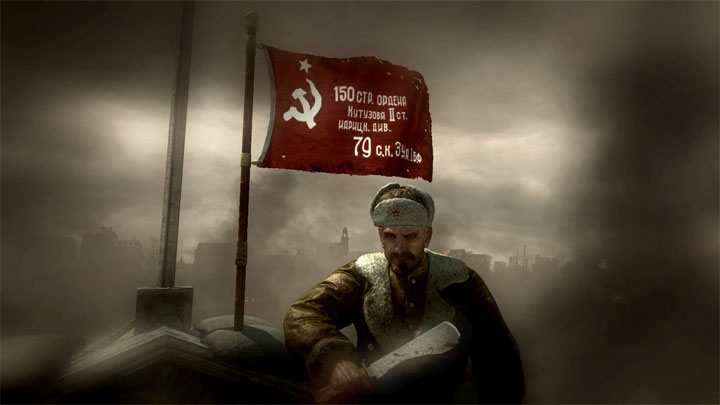 Fall of Berlin is a mod for Call of Duty: World at War, created by FeReise.

Fighting alongside with Sgt. Reznov in a new and more challenging experience for the Eastern front campaign

Some of the features include:

- Add new textures for one of the Fallschirmjager models. (Credit: War_Crimes)

- Edit and add more variations on heads, headgear and other equipment for Axis and Soviet units.

- Change texture details on one of Panzergrenadier models: Dot 44 camo pattern on anorak and helmet will be changed into Oakleaf camo pattern...

- Add new moel for Axis troop: Luftwaffe infantry (cadet and trainees): Based on so many Luftwaffe personnel who were attached/filled into the Axis defender forces in both Seelow and Berlin. (Notably: the 9th Fallschirmjager Division, a majority of them were inexperienced Luftwaffe ground forces and trainees)

- Luftwaffe infantry will appear in every 'Eastern Front' missions, but in a quite few number.

- Few number of Kriegsmarine naval infantry (the special unit I mentioned in the 1st article) now appear in the Eviction mission as an additional Axis unit. (In the 1st ver, they appear only in Heart of the Reich and Downfall)

- Rearrange weapons for Axis side. Especially, Kar98k will be a truly common weapons for the Regular German. (Slightly increase its appearance)