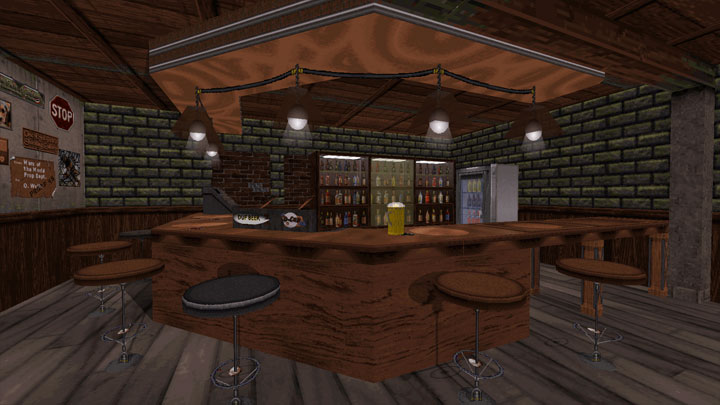 Back in Business is a mod for Duke Nukem 3D, created by  Ledsbourne

An entirely new episode of 4 levels with various themes: city/casino, nature/industrial, snowy/hi-tech and prison/nature. Each level has a strong mission objective to complete. Based mostly on original and classic assets of Duke Nukem 3D. Hope you enjoy playing it!

The main focus for the maps in was to create a strong sense of objective in each level (more elaborate than the usual button/keycard hunting). I was aiming at shorter type of levels at first, which probably is true in the case of first two maps  but as the work on the episode progressed, so did the length of the levels. Having different objectives to complete in each level made the flow of the levels more nonlinear, which again can be especially observed in first two levels, where you have a couple of parallel objectives that can be undertaken in any order. In case of the next levels, the nonlinearity is less obvious and more depending on details  some player choices might result in slightly different outcomes to the gameplay, or multiple strategies can be undertaken for certain events. Also, these two levels are more open for exploration.

I wanted the design of the levels to be a compromise of good aesthetics, details and shadows with memorable gameplay and effects/sequencing. There are some effects and sequencing which may feel a bit less intuitional to the players who are used to the game mechanics for past 25 years. The custom coding was kept to a minimal level  one of the most satisfying things in Duke mapping for me has always been finding creative ways of achieving innovative effects through a combination of vanilla game Build engine tricks and quirks. Same goes for design  while initially I was more keen on using custom textures, over the time Ive found them not really that good looking in Duke and mostly limited myself to using the original tileset. Especially in the 4th level, most of the odd looking stuff you can come across will usually serve some gameplay purpose.

The progression between the levels might not be what you would normally expect from an episode  the maps arent interconnected (besides the mission briefing levels which precede levels 2 and 3), as Duke is sent on his missions by the EDF. As such, you will not be able to keep the items from previous levels most of the time  but then again, during mission briefings you will be generously equipped for whats ahead of you. I wanted the connection between the levels to be mostly kept by the narrative and objective based levels, not by the location. This also allowed to make each map have a different theme to it.