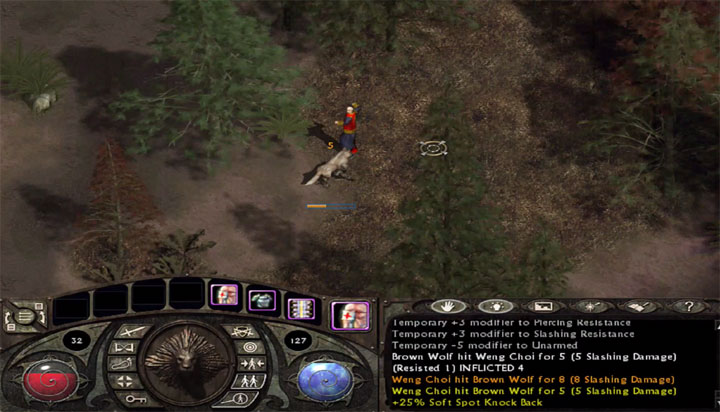 Weng Choi Mod is a mod for Lionheart: Legacy of the Crusader, created by LionheartJW.

Have you ever wanted to whoop some demons and goblins with the Barcelona shopkeeper Weng Choi? Well this mod allows you to do just that. Fitted with his own sounds and animations, Weng Choi rolls up the sleeves to take on the dark world of Lionheart as the Spirit Bearer. The mod also comes with a playable female counterpart, Mei. She also has her own animations and sounds, but is meant to function similarly to Weng.

DISCLAIMER: Thank you for downloading! This is fan-made LLOTC mod, purely for fun and curiosity. All original content and art belongs to Reflexive Entertainment and Black Isle Studios. Please note that this mod is designed for players who have already experienced the game in its original form.

-Male Character Model changed to a playable version of Weng Choi. He is slightly bigger than the NPC version because he's not inside shopkeeping all day.

-Female Character Model changed to Mei. She functions similarly to Weng Choi and is meant to be a playable female counterpart.

-Equipment is hidden to maintain character appearances. Weng and Mei are able to channel the strength of their equipment directly into hand combat. Their techniques will vary depending on the type of weapon chosen.

-Custom animations and sounds for attacks/spellcasts/reacts/deaths.

HOW TO USE THIS MOD:

1. If you have a modern copy of Lionheart: LOTC, make sure you extract the data.DAT file into a data folder with a program like 7zip. This will allow you to modify certain parts of the game code, albeit very limited.

2. Create a backup of all the game files so you do not lose the original game. This mod may be incompatible with other mods, due to the nature of modding a closed-source game.

3. To apply the mod, replace the existing game files with the corresponding files inside the mod folder. Edit the names as necessary for the game to recognize. Refer to the following file paths if needed:

Replace PLAYER (Folder inside of Sounds to override male voice with Weng):

Files for Lionheart: Legacy of the Crusader