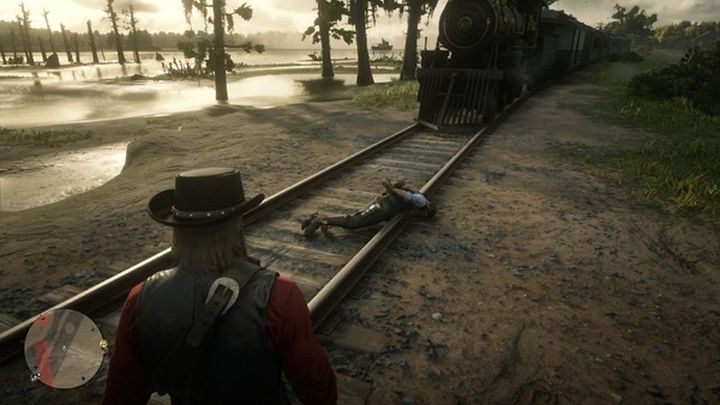 Photo taken moments before the crash.

RDR2 is for video games what Once Upon a Time in the West is for movies. Both of these titles combine an unorthodox approach to the Western genre, making the absolute most of the convention. This is another production by GTA creators, and again we are dealing with a monumental work. This time, however, we replace the sounds of the big city with the silence of the vast prairies, trying to find our own corner of land with our gang. And by the way, rob a few banks.

Our protagonist, Arthur Morgan, wields a bandit-like arsenal. In addition a standard revolver and razor-sharp knife, he also has a lasso. A quite inconspicuous tool  just a piece of rope. However, it's often essential that we are able to stop a victim fleeing on horseback without shooting their skull through. Once the target is closely tied, the fun can begin.

We put the delinquent on the back of our horse and get them near the railway. On the way, we can cross the river, where our prisoner might happen to be underwater. But let's get back on track. Here, if we're not lucky, we'll have to show some patience. After a while, however, we should hear the train coming. It's a clear sign that the grand finale is coming. So, we leave the unlucky bastard on the tracks and watch his painful demise. Unfortunately, there's no guarantee that we will ever find the body. Or at least parts of it.