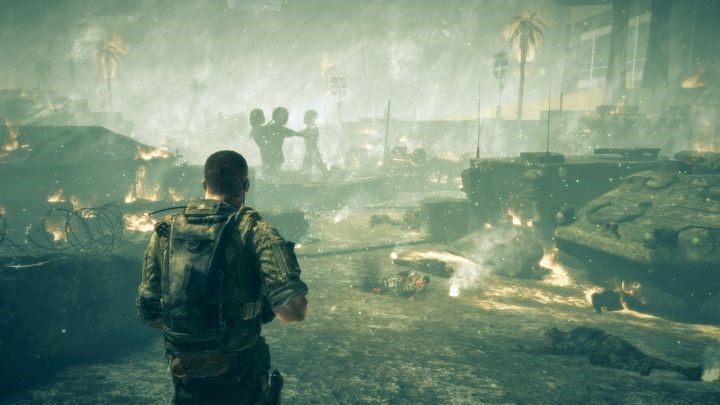 I love the smell of phosphorus in the morning.

SPOILERS FROM SPEC OPS: THE LINE READ ON YOUR OWN RESPONSIBILITY!

Don't be fooled by appearances. Spec Ops: The Line is, on paper, a typical third-person cover shooter that doesn't do anything interesting in terms of mechanics. Its uniqueness lies in the subtle details at level of plot and decision-making. But there are no dialog lines to choose from. The decisions here are different  try to shoot the ropes of two hangmen, hoping for a desperate rescue? Try to take down the snipers aiming at your head? The creators bring Joseph Conrad's Heart of Darkness to the screen to tell the paradoxes of war and explore the limits of our morality.

This is quite an interesting case, as most titles on the list can boast an open world, or at least some free space to roam. Spec Ops: The Line is the complete opposite of such a gameplay formula  here, linearity and tightness of locations prevail. Hence, the choices are made in the heat of battle. Everything is the result of impulse; soldier's intuition.

The victims of naive heroic ideas are not only the allied soldiers, but also the civilians they escort. The protagonist doesn't over-analyze it, and rightly considers anyone shooting at him worthy of neutralization. At one point, the numerical superiority of the enemy is too great, so we put down our guns and use weapons of mass destruction. Thus comes one of the most memorable sequences in Spec Ops: the Line  dropping a white phosphorus bombs on the entire army and a group of nearby residents. The sand-covered Dubai suddenly stands in a terrifying glow of white.