If you tried to describe what the world of The Witcher is like based on the series alone, you'd have a tough nut to crack. Cities, inns, rivers, or even roadside shrines. Without resorting to the books or the games  just the series alone. As I try to go beyond its narrow frames, what I imagine is bland and intangible. Why? Because the creators are not really trying to establish a setting, and if they do, the attempts are very, very shy.

During the first season, we look mainly at the interiors of rooms and many, many forests. The latter are often ridiculously misty and, consequently, all look alike; the former are the most typical and banal fantasy locations that you can imagine. All taverns look the same, no matter if in Nilfgaard or Temeria. There are no wide shots too, so the locations almost never have any context. A town perhaps? Maybe a field or a garden? Compare with the first inn of The Witcher 3  and its surroundings.

Take Cintra, for instance. Just remember that this is a very important place in the series. Most of the action takes place in empty halls or throne rooms as empty as a Protestant Church. In addition, there's a couple of stone corridors and empty rooms, some fragments of walls, a tower, which protects the troops of Calanthe. We get a rather vague panorama of the city a few times. So, you can't see anything very interesting. And that's it. Some scenes from the first episode have even been reused in the last episodes, but that makes sense narrative.

Or look at Blaviken  a city where a market is regularly held. The next one would take place soon, and preparations for it should have begun during Geralt's visit. What preparations, you ask? Because there's nothing like that in the show. Again  a couple of sad and empty streets, a typical tavern, two huts and Stregobor's tower. The effect is rather sad, and this still is probably the second best place after Cintra from the first season.

In The Witcher's depiction of the very world, budget constraints are very apparent. Undoubtedly, it lags behind the competition. Game of Thrones had its own flair  strongly evocative of medieval England, but with a unique and distinctive details that set it apart from others. CD Projekt RED resorted to Slavic themes in the third part of the Witcher precisely to make their vision original and different than the dozens of other western RPGs. Unfortunately, Netflix failed by presenting a typical, formulaic fantasyland. It simply looks like the next fantasy show.

Some of you will say its nitpicking the series doesn't look so bad overall. Of course, it's not something that would make you hate the entire show, but the world is disappointing, especially when you remember how vivid and detailed Sapkowski's depictions were in the books. Ok, maybe it's not even disappointing  it just isn't there. 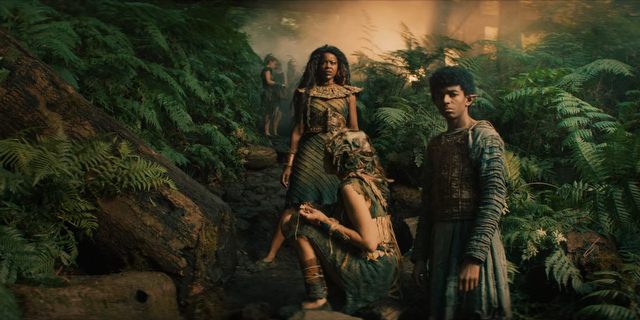 What do we do here? Sitting, watching the flares.

The creators probably won't have another chance to improve that location, but we can still complain. And the problem, contrary to what Internet troglodytes write, is not the dryads' skin color. Brokilon is, first and foremost, so vapid it could give you nausea. The absurd intensity of sun flares looks extremely cheap, and expectedly isn't enough to imbue the location with any identity.

It also doesn't help that the dryads inhabiting the forest are not... doing anything particular? We don't see their huts, we don't see them gathering herbs, smoking pot, cooking or talking. They only stand or squat. This place is more depressing than the pile of corpses that surrounds it  although this was not the goal of the creators. Brokilon does not convince me at all. The forest from the show looks like a theatrical prop, not a place where anyone lives. Not the most exciting place to live in.

A larger budget can improve the situation only if the developers themselves realize that their design is just generic. If they decide to stick to it, we'll get more, but it will be just typical, medieval, fantasy landscapes.