The presence of such a remarkable character as Elizabeth in the story of BioShock is no coincidence – the story itself is also quite memorable. Although I liked the stories told in all the installments of the series, I consider Infinite to be the crowning achievement. The ending of the game is almost impossible to predict – which I managed to do in number one. Actually, even seeing the ending doesn't mean that we'll immediately understand what's going on. I don't know about you, but after reaching the end credits, I quickly proceeded to look for an explanation on the web. Then I grabbed my head and immediately wanted to play the game again – this time around with full knowledge.

The malicious ones might say that the plot twist cooked up in BioShock Infinite is a cheap shot. Completing this game the second time, however, proved to me that this isn't the case at all. The entire game is clearly designed with the conclusion in mind, the evidence for this is hidden, for example, in some of the audiologs scattered around in Columbia. However, there's not enough information there to make the conclusion completely unambiguous, the only point of reference is the "truth" that the creators give as apparently completely obvious. 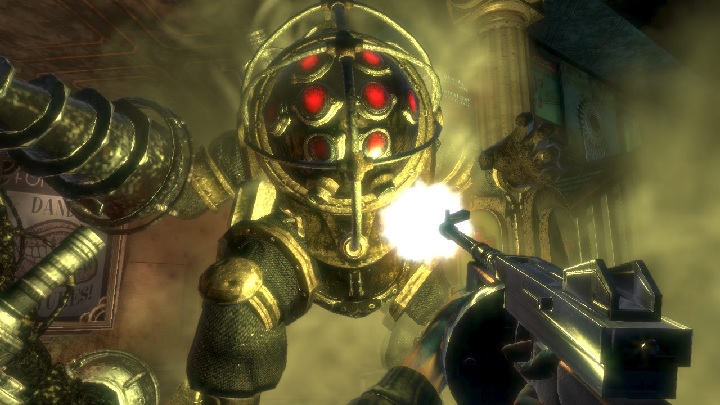 Big Daddies don't just look cool. They also play an important role in the plot of the series.

Knowing the main plot of BioShock Infinite – especially in combination with the story presented in Burial at Sea expansion – also changes the perspective on the previous installments of the series. And it's not that these stories were bad in themselves. On the contrary, they are also very good. However, I'd wager that it's not the story itself that shines in these two games, but rather the delivery.

Let's consider the original game. The reson why the protagonist – and therefore the player – takes action are conversations with various people, usually over the radio. Knowledge about the game world and its gloomy past is derived either from these conversations or from the audiologs they find. In this way, we often discover contradictory information, which further increases our interest in the story and encourages us to continue playing – finding out the truth really becomes our main goal.

I realize that today, this way of portraying the story might seem quite common. In 2007, however, when cutscenes were all the rage, this was something rare, if not completely new for many players. At the same time, you should remember that the locations that make up Rapture completed the whole picture and supplemented the story with additional elements – which was discussed on the first page of this article. In other words, BioShock was all about the story, in a similar way to the Souls series that launched two years after its release.