Columbia – idyll in the clouds

The origin of Columbia, which we visit in BioShock Infinite, is quite different from Rapture. Its founder was Zachary Hale Comstock. This man was proclaimed a prophet because an angel appeared to him and ordered to build a city in the clouds, which was to be a paradise for conservative Americans, living by democratic principles, committed to "traditional values" and family.

Consisting of several floating islands, Columbia was able to move unnoticed around the world. Its aesthetics corresponded to the notions of a utopian, technologically advanced city – bright colors, lush vegetation, majestic temples in honor of prophet Comstock and three of the four founding fathers of the United States (only Abraham Lincoln was out of the club, identified with the devil), as well as smiling, joyful, entertaining people. After the dark, isolated, immersed in madness Rapture, we could for a moment believe that we really ended up in some kind of paradise on Earth (or rather: above it). 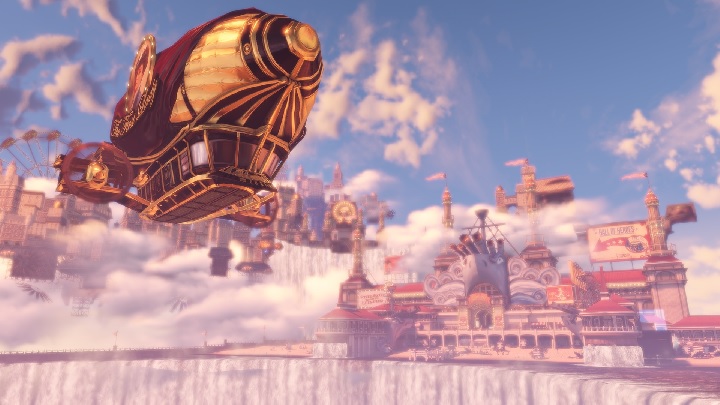 The ninth circle of hell awaits behind the heavenly veil.

However, it was quite the opposite. The city in the sky quickly turned out to be saturated with the same vices it tried to escape the USA from (social inequality, racism, chauvinism, etc.). Moreover, it didn't function in accordance with the spirit of democracy, as evidenced by the attack on the defenseless people of China in 1903. All the relationship between the United States and Columbia were severed after that, and the city disappeared in the clouds for good.

In the same year, the social rebellion of the group known as Vox Populi radicalized, and its target was Elizabeth – the heiress of Comstock held in seclusion. The end of the rebellion would only come nine years later, when Booker DeWitt, the protagonist of BioShock Infinite, arrived in the sky city with the task of getting the girl out.