As you may have noticed – or you may just know – when creating both Rapture and Columbia, Irrational Games were accompanied by specific philosophical and political concepts. When creating the underwater metropolis, the developer referred to capitalism and the philosophy of objectivism, and when creating the city in the clouds, they focused on criticizing nationalism, racism and revolutionary aspirations. The first case always seemed more interesting to me, so I will discuss it briefly. It's worth emphasizing, however, that in all the games in the series, these threads are based on solid theoretical foundations and presented in a though-provoking way.

Let's start with the founder of Rapture, Andrew Ryan. His name and surname are not accidental. It's a variation on the pen name Ayn Rand, adopted by the St. Petersburg-born writer Alissa Zinovievna Rosenbaum after she moved to the United States. She is considered to be the founder of the philosophy of objectivism, contained mainly in the novels Atlas Shrugged and The Fountainhead The Fountainhead ). So, if you've been wondering where the names of characters such as Atlas and Frank Fontaine come from in the BioShock universe, then you should know now. 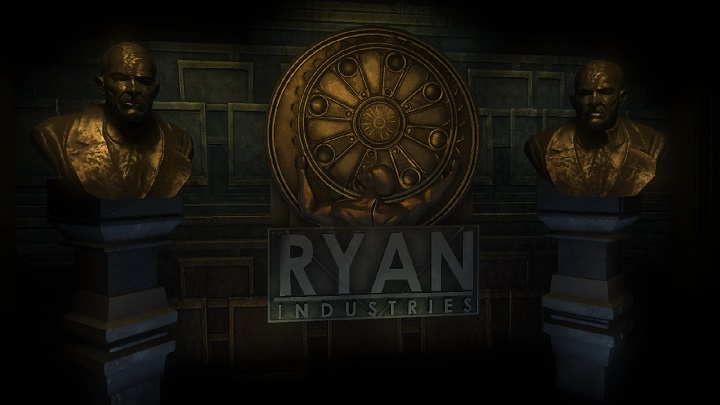 It should read: Rand Industries.

Rapture as a place was based on John Galt's Valley from Atlas Shrugged... Not very faithful, of course, since Irrational Games' work was supposed to criticize objectivism, rather than praise it, as in Rand's novel. Most of all, Andrew Ryan's underwater city had a law-enforcing council, and later also a police force, none of which would be accepted by objectivism. They were both, however, only a facade, as the founder of Rapture reigned all of the power, which – in combination with, for example, the lack of free trade – made it a strictly authoritarian metropolis.

Furthermore, Ryan decided to accept new residents as citizens, who were prohibited from leaving the city, which violated the principle of self-ownership assumed by the philosophy of objectivism. In addition, as I mentioned in the description of Rapture, it was supposed to bring together talented, ambitious and independent people. However, it just so happens that everyone we meet in BioShock have achieved their goals, mostly by using others to do so, which completely contradicts objectivism (only Dr. Brigid Tenenbaum tries to correct his past mistakes).

All these differences – there's more of them, but let's stop there – seem to boil down to one conclusion. Objectivism can only work on paper; on the pages of a novel. In practice, maintaining its principles seems impossible, so people in power in the real world should not be inspired by it. That's the underlying message – at least in my opinion – of the first BioShock. Make sure to share your opinions if you felt differently about it.