Since we're talking about the first game for now, let's also look at the morality system implemented in it. It's interesting because it doesn't forgive mistakes – in order to be able to see a positive ending of the game, you must start sticking to a strictly defined course with the very first decision you're able to make (in a way, it resembles the way the canonical ending in Prince of Persia: Warrior Within was accessed, requiring you to get all the life upgrades throughout the entire game).

In BioShock, we can meet twenty-one little sisters – little girls who have been genetically modified to produce and process the gene-altering ADAM substance in their bodies. Each of them is protected by a popular Big Daddy. Having defeated the monster – which isn't easy – we can decide the fate of the girl. 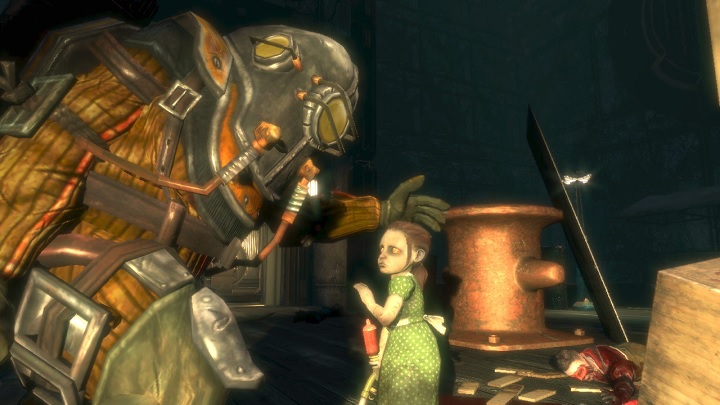 Relax, Daddy will protect you.

Girls can be harvested – earning 160 units of ADAM for each – or rescued. The latter choice yields half as much raw material. As the little sisters are the only source of ADAM, it's sometimes difficult to insist harvesting them for some additional powers. And of course, there's nothing stopping you from doing it, but it will also mean that we won't be able to access the good ending – only leaving us with a greyish or bad ending (killing some or all of the Little Sisters).

It's enough, then, to kill one of the girls, on purpose or by accident, and we immediately become "the bad guy." Many players playing BioShock for the first time certainly didn't realize the importance of the choice they were making (the sequel used a similar solution, but people could apparently have been ready for it) and, as a result, they got one of the bad endings. Some of them might just have wanted to test the available options, and others might have wanted to develop their character into a more powerful fighter. However, they had no idea that they were doing it at the expense of the story. Finally finding out about this was quite a shock – at least for me. However, it's a pity that more games don't use similarly unobvious solutions.