Being an immersive sim also meant that BioShock emphasized strategizing and required a bit of thinking in combat – especially on higher difficulty levels. This was particularly clear in the first game, and the trend was almost non-existent in BioShock Infinite , which – save for the second installment of Burial at Sea – was pretty much a full-fledged shooter.

In part three, it was possible to quietly eliminate enemies unaware of our presence, but we had to get rid of the opponent not only unnoticed, but also with one shot / blow – otherwise they would automatically alert others. So, in practice, it was pretty unfeasible. The first BioShock was different – stealth was an extremely important factor of gameplay. The game couldn't be completed without being detected a few times, but still, many ordinary enemies could be killed with the OP wrench before resorting to firearms. 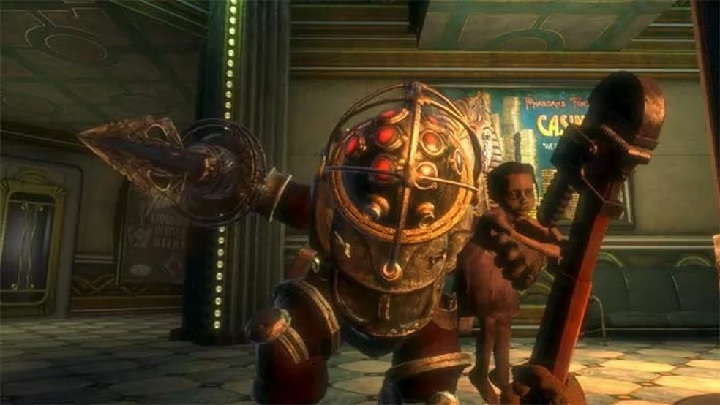 It's possible that BioShock Infinite was initially supposed to offer stealth mechanics at least equal to those in the previous installments of the series. However, the game was created in huge chaos – so much that its final concept had to be tied together on the final stages by Rod Fergusson, hired especially for this task. Perhaps sneaking, as an inessential part of gameplay, was binned at that point. But not entirely – there are a few scripted sequences in which the fight can be completely skipped if we don't get caught. It seems that they are a residue of these mechanics, only restored in their full form in the aforementioned Burial at Sea – Episode Two expansion.

One way or another, each installment of the series excelled in combat (although part three had a little too much combat overall). Each of them can be described as a good shooter, but approaching them exactly as shooters isn't recommended in all the cases. It's largely due to various types of weapons, as well as special powers called plasmids and vigors. Skillful use of them is not only spectacular, but most of all effective – especially when combining their effects with elements of the environment. For example, enemies staying in a pool of water received much greater damage from electricity.