I decided to devote a separate segments of the article to melee weapons as well as plasmids & vigors. These are the staples of BioShock, and they certainly deserve more attention. Let's begin with the former.

In BioShock and BioShock 2 , the primary close-range weapon is the wrench. This is an inconspicuous tool that the average player will stop using as soon as they find some guns. This is not a mistake, per se – rather an underestimation of the simple tool. It can be made so deadly that some players complete the entire game with it (I didn't manage to do it – fighting some Daddies this way is a real pain, but apart from that, the fun is really great). 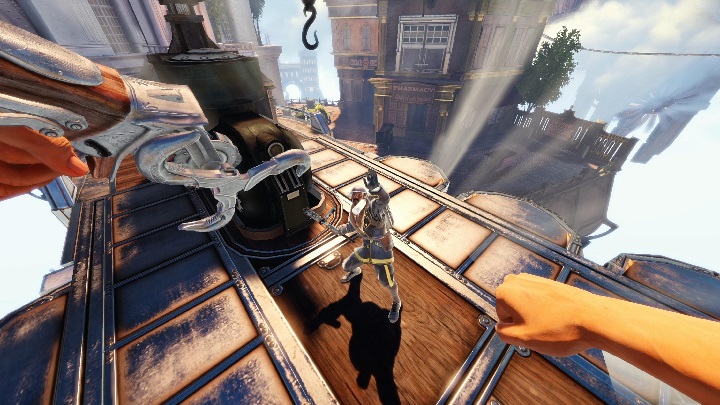 For a bloody bomb!

The way to make the wrench OP is by getting the right tonics (skills) – Wrench Jockey 1 and 2, and the Wrench Lurker 1 and 2 specifically (all can be equipped simultaneously) – to increase the damage dealt to unaware enemies up to 945 points. To top it off, you can use the Electro Bolt plasmid to stun enemies – and enemies get four times the damage while stunned. 4 x 945 = 3780. If you didn't know, now you know – this is why stealth is an indispensable element of BioShock gameplay.

The second weapon I wanted to mention is the BioShock Infinite'sSky-Hook. It's not as effective in combat as the wrench – although the damage it deals can be increased in a similar way – and you cannot finish the game using only this gadget. However, it has two other uses that make it quite unique.

First of all, it's designed to move quickly on the rails that connect Columbia – and since you can fire a firearm mid-flight, combining the two mechanics is a smart way to deal with more difficult battles. Secondly, it's used to perform extremely bloody and spectacular finishers. It was mainly because of the hook that BioShock Infinite was considered excessively brutal. Rightfully? We'll discuss this below.