Showy and deadly plasmids and vigors

At first glance, plasmids (BioShock and BioShock 2 ) and vigors (BioShock Infinite) are powerful special abilities, often associated with elemental powers, which require mana or its equivalent (called EVE and Salts, respectively). And the plasmids really are this straightforward. We have already mentioned the Electro Bolt. Incineration sets enemies on fire and is especially effective near oil stains. The name Winter Blast probably says everything you need to know. There was also Target Dummy, which created the illusion of the player's character, which distracted the opponents. 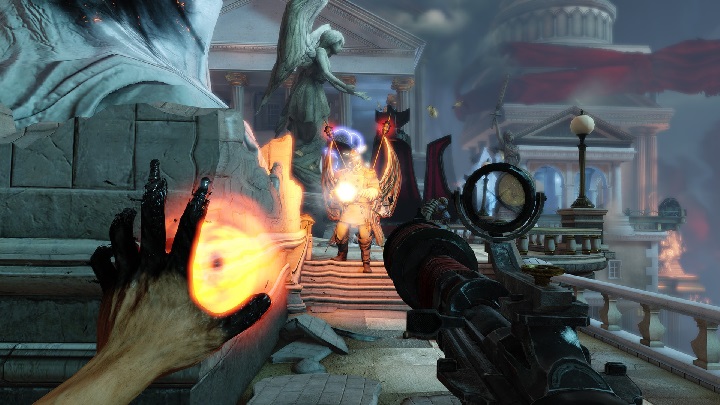 I've got the vigor.

Vigors are much more interesting because their effects can be stacked into various combinations. For example – if we summon a Murder of Crows and then hit them with a Devil's Kiss or Shock Jockey, they will turn into flaming or electric crows respectively, dealing much more damage. An enemy under the influence of Possession can be treated in the very same way, dealing damage to enemies around them.

The number of combinations is limited and you cannot combine the effects of two different vigors. However, it's worth experimenting, so that combining vigors becomes your second nature. Not only does it make some of the clashes easier to win – including the unfortunate, extremely difficult final showdown – but also makes them very spectacular indeed. There are also some extra vigors available in the Burial at Sea expansion – though they are formally called plasmids, like in parts one and two, because the action takes place in Rapture, rather than Columbia. However, their effects can still be combined.