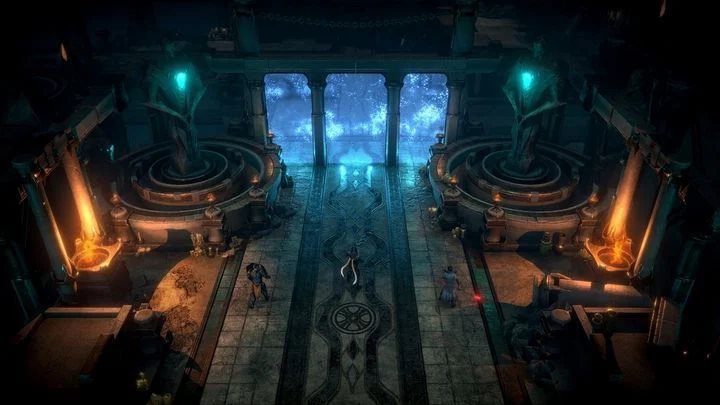 Steampunk interiors are the perfect place for mages and engineers to clash.

Dark Envoy 's predecessor, Tower of Time , turned out to be one of the biggest surprises on the indie RPG market a few years ago . It was hard to believe that only 11 people were responsible for the production of such a refined title in every respect! Now that Event Horizon has deservedly achieved, at least on the European market, the status of a serious player, things look even better.

Fans of the spin-off and the sequel in one will no longer have to limit themselves to exploring the titular tower as in part one, and thanks to the ability to travel by air vehicle, we will visit many more places more or less important to the main plot .

This time, the choices we make are to be even more important in the context of the entire journey, and the coherent steampunk scenery reminds us of the world we are in. Before the fall of civilization, they will defend Kael's Land (but not the same as in the previous game of the studio), but also Malakai . One thing is certain - real-time tactical combat, despite a fairly high level of difficulty, should give every even slightly experienced player a lot of satisfaction, and after what the studio from Gdynia, Poland showed a few years ago, we can be sure of an extraordinary plot.

RPGs are without a doubt my favorite games. That's why I'm very happy that, despite the fact that, apart from Bethesda's Starfield and Hogwarts Legacy, there will be no great premieres, there are too many good medium-budget productions!