Crafting and shops in the city

Crafting in Lineage 2 was a peculiar case. There was actually a special race, and even a special class dedicated to this occupation. The dwarves were of course the smiths and armorers, so if anyone wanted to do crafting, they had to develop Dwarf Artisan. It was the foundation of the fun economics of Lineage 2  this game's characteristic feature was low chance for the so-called full drops. Grind usually yielded materials or schematics and recipes for items. Dropping a complete sword was rather unusual, so the Artisan class was actually very important.

On the other side was Dwarf Scavenger often referred to as the spoiler. Why? Well this particular character had a special attack, allowing him to obtain additional material from the defeated creature. Scavenger and the subsequent evolutions thereof were machines for making money by being able to farm the things that were in-demand more quickly. Numerous players created separate characters with this class and stopped its development at a certain level in order to collect specific materials for sale. 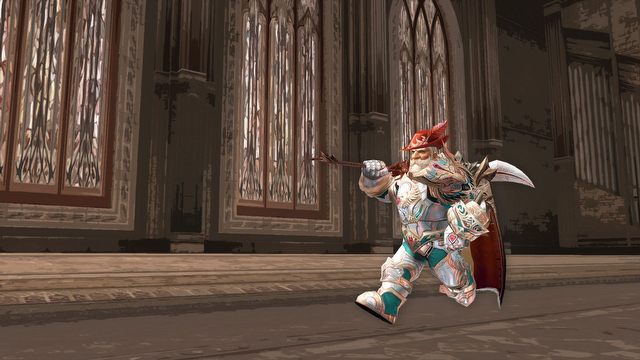 The system for improving equipment also had its charm, allowing not only to increase the stats, but also to add special properties. For example, one could augment a sword to give a bonus to casting spells. This was followed by improving weapon stats by raising them +1, +2, +3, etc. Of course, there was a lot of risk involved, and the process itself was expensive: but what don't you do for a cool effect, right?

Finally, I should mention the shops in Giran or Aden. You didn't play Lineage 2 unless you can remember crowds of people settled on the market square with WTB and WTS signs. Although in retrospect, I admit that I would probably gone back to this system and prefer a modern Auction House, there was some undeniable appeal to that classic solution. And those lags! As soon as you entered a city! Unforgettable memories.

Can you still play Lineage 2?

You sure can. Admittedly, the game has come a long way, it has been turned upside down, got a lot of updates, and it is now available in a free-to-play model. Consider this before you reach for Lineage 2. If you want to play on official servers, you can use those from NCsoft or Innova, if you're based in Europe.

Innova currently offers two versions of the game on the 4game platform: Lineage 2 and Lineage 2 Essence. The Classic used to be available before until recently, but disappeared a few months ago. If you want a casual experience of the modern version of the game, just go for Lineage 2.

On the other hand, if you prefer to avoid the huge grind and prefer lone expeditions and casual fun, you can head for Lineage 2 Essence. This version offers facilitated and accelerated exping, has a built-in bot, and is dependent to some extent on the Item Shop. It also provides access to a special a Death Knight class and a modified pet system. It is worth remembering, however, that Lineage 2 Essence focuses on PvP.

Prepared in cooperation with Innova.