As a fan of the series, I approached the fifteenth part of the series as I would a hedgehog. The last good installment of this popular jRPG series was released in 2006 – at least in my opinion. Of course, I'm talking about Final Fantasy XII. The subsequent FFXIII, FFXIII-2 and Lightning Returns: FFXIII (who comes up with these names?) turned out average, and the online part fourteen is just not a game for me. So, you could say that the desire to play a good new Final Fantasy was strong in me. However, watching the production process for this game was causing more concerns than reasons to be happy.

The reality has verified my expectations in a very strange way. The plot, which I thought couldn't fail, turned out only moderately successful. Dialogues were a similar case. A positive surprise for me was the combat system, and it was somewhat of a surprise – the dynamics and complexity hidden under the apparent simplicity made grinding the next levels very pleasant. Especially since from the audiovisual point of view, the clashes also looked great. 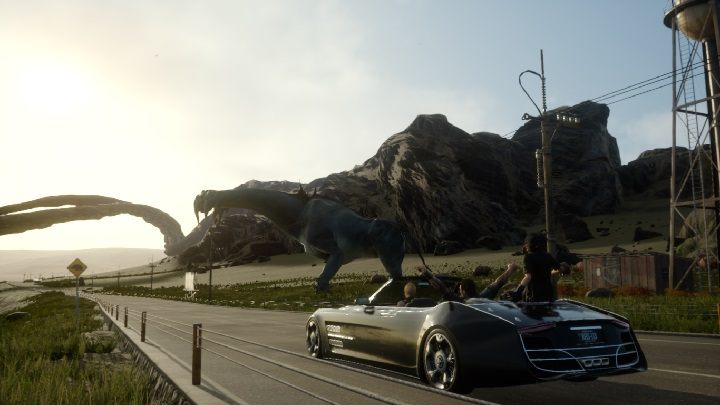 Traveling Regalia could be summed up as "monotony."

And everything would be fine, if not for the emptiness and boredom of the open world, which you have to navigate using the unfortunate Regalia. The first, second, even the third ride in this royal car gave me little pleasure. Each subsequent one, however, was taking it away. It's true that the machine did not have to be driven manually – you could engage autopilot and go for tea. But again – in the long run, it was tiring. Fortunately, the driving sequence could be skipped by paying a symbolic sum in gil, the game's currency. Nevertheless, it still took a few loading screens of waiting.

Still, if there were at least some interesting places to visit in the Regalia... but no, apart from a decent storyline, Final Fantasy XV's open world didn't have much to offer – definitely for me. Lots of repetitive, mundane side activities, indulging in which was quickly starting to feel like ticking off a very long list. At one point, I gave it up. I hope FFXVI will be more convincing.