The first of the new games added in Nov '22 is Horizon: Forbidden West. This exclusive title from Sony was already available on the market when I wrote the original version of this article, but since it was less than two months after its premiere I hadn't had enough time to really try it, so I decided to skip it. I recently managed to catch up, and now I can add the new Horizon to this list with a clear conscience.

It's not really that this production by Guerrilla Games bored me to the point that I couldn't finish it. I was mainly attracted to hunting the mechanical dinosaurs, realized in the unique style of the Monster Hunter series. Although I had a lot of fun, the degree of complexity is hardly to compare to that of the Capcom series. 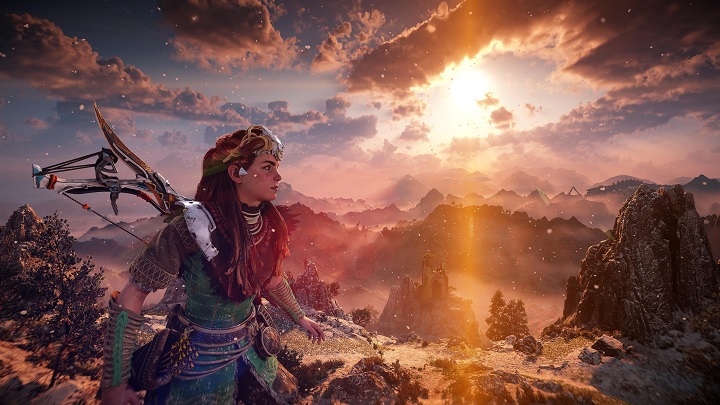 As for the rest of the gameplay elements... well, I treated them basically as uninteresting time fillers. A map full of "collectibles" and outposts waiting to be cleared like in Assassin's Creed: Odyssey, arduous climbing – why did the creators not follow Ubisoft games in this aspect? – boring races and too easy combat.

In addition, Horizon: Forbidden West is much poorer in terms of story than the previous installment of the series. Exploring the lore really kept me hooked to Zero Dawn. Since we already knew roughly the entire history of Aloy's world, there were basically no more secrets to discover in the sequel. The storyline, however, turned out to be just fine. But it definitely wasn't something I'd recommend playing this game for.

As a whole, however, it definitely has legs – the mundane gameplay elements are mixed with some more interesting ones, thanks to which – if we also skip the more tedious, repetitive activities, such as races or clearing outposts – you can spend several dozen pleasant hours with Horizon: Forbidden West without yawning. The charming graphics certainly help with this – I can't count all the moments when I stopped to look at the scenery around me. I would even venture to say that the new Horizon is one of the most beautiful productions released simultaneously for the eighth and ninth generation of consoles. It's a pity its creators went a bit too far into clichés and repetitions, because otherwise, this would have been one of the greatest hits of this generation.