Lets change the subject. Obsidian Entertainment and inXile Entertainment were cooperating while producing Pillars of Eternity and Wasteland 2, right?

We had Chris Avellone helping us with Wasteland 2 primarily. Hes designed the agriculture scenery of Highpool. We also used a lot of his notes for our skill and perk system. For Pillars of Eternity we didnt influence its system in any way. I gave [to Obsidian] lots of advice regarding Kickstarter from things I have learned but nothing on the project itself. On Torment though, weve licensed the Pillars of Eternity technology. Both games share engine, dialogue system and so on; we extended our cooperation here. And not to mention that we are talking informally all the time. Like brothers.

Two Californian companies with a vast experience in creating RPGs...

We know each other since... You know, I gave Feargus [Urquhart, CEO of Obsidian Entertainment] his first job. I gave him a bunch of horrible projects to work on at the beginning, making him learn the hard way... and now hes a seasoned veteran.

Since youre using the Pillars of Eternity engine, are we going to see similar interactive cutscenes, as if taken straight from gamebooks, in Torment?

Actually, we are doing that. Its funny because weve came up with this idea independently of Obsidian. We didnt know they were doing that  or at least Im pretty sure I didnt. And actually we are taking it a little bit further than they did in terms of more choices for players. I like this kind of break. There are something like three distinct aspects of Torment. There is just wandering around and talking to people. Then there is combat which is a little more scripted in nature... it isnt like a lot of trash mobs coming from everywhere. And the third aspect is what youre talking about  break away and  choose your own adventure moments which affects a greater narrative. I like these breaks because you are never doing the same thing too much. 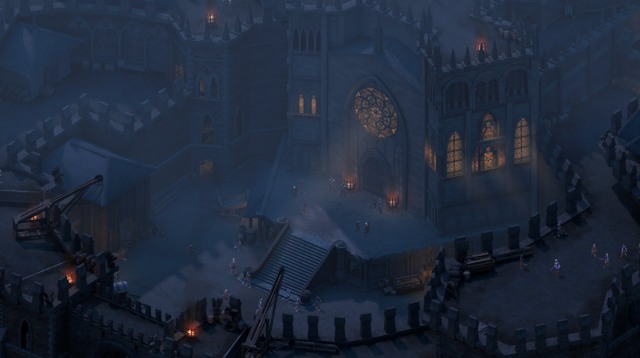 Pillars of Eternity and Torment: Tides of Numenera share the same technological solutions.

Is there a way to complete the game without killing anyone?

Hmm... I dont know if you can get through the whole game without killing somebody. Im not sure.

There is a particular concern about Torment. We havent heard much about the game in the past few weeks so Id like to ask you straight: should we prepare ourselves for another delay of the release of this title?

Its possible. But its more complex. What we have to do right now is to get it in peoples hands as soon as possible so they can play it, experience it and give us feedback. Until that happens its hard to know exactly what date its going to be released. I dont think were going to get much  changes feedback, as it was with Wasteland 2. Our focus there were systems, UI etc. and here it is more about conversations. Its only about so many ways of making choices. So all hands are on deck to make sure we get that on peoples hands and when that happens it will be easier to make comment on the release date. You also have to remember that this game is huge. It has more than 800 thousand words, its more than the Bible. And you have to localize it which is a whole other thing. Were going to make a big jump and get the playable game into players hands really soon. That will help set up when exactly it will be made.

Lets change the perspective and talk about the idea of crowdfunding. At the beginning, Kickstarter was meant to be a kind of start-up for small indie studios. This way, the developers who had no chance to get a publisher or investor for their project could collect money straight from the players if they liked what these studios were planning to do. But then the  big fish came to Kickstarter and launched projects worth millions of dollars. And when they succeeded in backing one game of such a big scale, they started to use Kickstarter for funding more titles. Now, some people say that such a strategy  kills smaller developers and their initiatives. Do you agree with these accusations?

No, not at all, and there is a lot of arguments to prove that they are not true. Ive met with those theories before and I could reply to them in many different ways. To me its like saying:  When Iron Man 3 came out, it took all the money away and no one in the industry could get profit. Lets look at the last year on Kickstarter  the overall amount of dollars spent was down, some even believed that Kickstarter was dying. But the number of projects was up. And who came with all these projects? The small guys youre talking about. And the next thing  it was shown that when we have a big new Kickstarter  like Exploding Kittens or something from Tim Schafer  a large percentage of those people looking there end up backing other projects. As a result, we have more money in the ecosystem. So last year there were not many big campaigns and the overall amount of dollars on Kickstarter went down a lot. You are going to see the difference this year, as we have many big projects, and people who will come to back me will also back the other guys. So there is an emotional aspect of this thinking that somehow we are taking away dollars from smaller projects but actual statistics prove it wrong. Beyond that, I am promoting young developers and trying to help them but even if I didnt, there is still a  halo effect that comes with it.