Theres also a different accusation floating around and Id like to hear your take on it. When a well-known developer has one project funded on Kickstarter and later comes back with another, some players say that these developers are looking for  easy money, while they should fund their games with the money earned on their previous game.

Well, youre assuming that the money which were made from the prior game are enough to fund the entire next project. I think people dont really understand how it works. Lets say youve raised 400 thousand dollars, youve said: Lets make a game, and then youve made a million dollars and you hear: Theyve made a million dollars!. Actually, with that I can pay my taxes and pay for six weeks of work. Six weeks... while it takes a year and a half to make a game. Its not very exciting, right? Its not like people are going to Kickstarter and they make 50 million dollars. It doesnt work that way. But even if it was the case... While creating a game on your own, you can go to Kickstarter, or wait for Early Access, or wait for release, or wait for sales, or wait for bundle. Its up to you, you can skip any of these stages. But there is no negative aspect of just offering people something. You know, we have stunning hand-made boxes for The Bards Tale IV for 500 bucks. Theyre beautiful. But you dont have to buy them to make sure youll receive the game.

Still, there are also developers who announce a new Kickstarter campaign even before they release their previously funded game, like Obsidian Entertainment did with the rumored Pillars of Eternity 2, and Slightly Mad Studios with Project CARS 2.

We did the same thing. We announced Wasteland 2 and meanwhile we revealed Torment: Tides of Numenera. People said: How can you do that, you havent delivered the first one yet. Ive been delivering games for 30 years so we get it, and well deliver Wasteland 2. And now we are doing it again. The thing is, as I said before  you dont want to fire everyone when you are done. I could just sit and wait until Torment is done but what possibilities would I have without money coming in? I need to have the next project ready to go before I finish the first one. 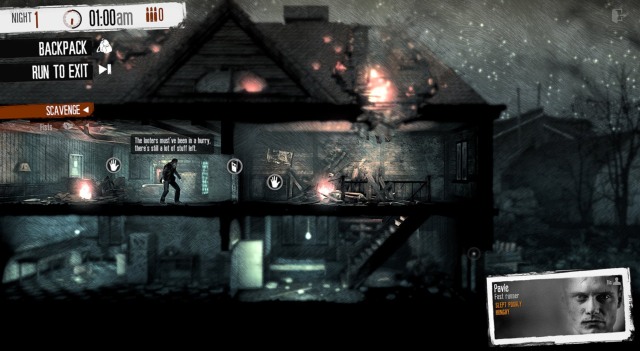 Brian Fargo appreciates This War of Mine.

We can say that today there are two major schools of creating RPGs  one with an open world, third- or even first-person perspective, and a dynamic combat system, and the other represented by old-school isometric RPGs such as Torment or Wasteland 2. Do you think this old-new  school of making role-playing games is just a temporary trend or will it last longer?

Well, we dont need multimillion sales to survive on these games. Hundreds of thousands of pieces is OK. Both Wasteland 2 and Pillars of Eternity became hits on Steam and players gave them very high marks. So I think we have fundamentally created an experience which people liked. As long as RPGs are really, purely fun and working on the entertainment level, people will continue to buy them.