The idea was simple  to develop a modern technology that will look great on consoles in 60 frames, and be breathtaking on PCs.

Drobot first told me about creating weapon models for the game. The studio has developed a separate system, used only for weapons lighting  looking at them, you can see that parts made from different materials reflect light differently. We'll be able to see fingerprints on them, and an oily, opalescent coating on the metal surface  as if the weapon had just been cleaned. I probably don't have to mention all sorts of dust and dirt settling on the barrel and other elements of the equipment  or maybe I should? Well, it looks neat.

The new game engine allows you to display much more polygons, which affects the detail and smoothness of the brand-new animations (including movement of characters, and their facial expressions). Of course, the complexity of the polygonal grid (the so-called mesh) is dynamically scaled depending on the power of the machine the game runs on and the applied settings, as well as whats happening on the screen. 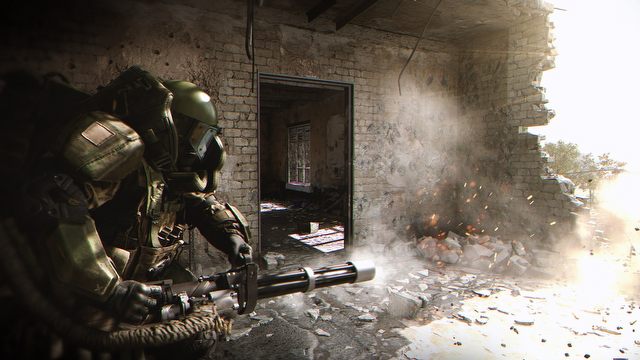 However, the most interesting gimmick of the new engine of Call of Duty: Modern Warfare is undoubtedly a thing called spectral rendering. Michal Drobot spent untold hours learning how to use this technology in order to recreate the image from night-vision goggles as realistically as possible. And you would expect the studio to make such an effort, as most modern shooters have sequences, in which such gear is used. The developers wanted to make sure this element isn't an irksome frill.

Night vision was invented in 1926 by a Scottish television engineer, John Logie Baird. The first military application of the see-in-the-dark technology happened in 1929, when a Hungarian physicist, Kalman Tihanyi, developed an infrared camera that was installed in British anti-aircraft systems. Initially  because of the size of the first models  the technology could only be installed in airplanes or tanks (before the end of WW2, about 50 Panther-type tanks had such a system).

Attempts were also made to equip infantry with the NV technology. During World War II, this meant carrying a heavy battery and a lamp emitting light, as well as a transformer (weighting approx. 30 lbs.) The first scope to allow accurately shooting in the dark  introduced by the German army in 1945  was the ZG 1229 Vampir. It was mounted on the StG 44 assault rifle. The soldiers who used this invention were called Nachtjägers (germ.  night hunter").

First of all, it is worth noting that the NV in Call of Duty: Modern Warfare is more than just a green or blue filter imposed on the image, as it's often the case in other games. What Michal Drobot presented in Krakow exceeded my wildest expectations.

When I wore a modern, military-grade NVG set for the first time, I felt like throwing up. A cutting-edge device of the kind features multiple lens, allowing you to see at a wider angle, for example. It really is a creepy experience. And we thought that you, as the player, should be able to experience something like that.

Spectral rendering is triggered when we engage the NV. This technique is supposed to simulate the actual operation of night vision, so it considers sources and reflections of infrared light. The color changes, of course  we see mostly green, but an attentive observer will see that the perspective changes a little (after all, we look through the multi-lens glasses that expand the angle). This very realistic effect is a result of laborious work, for which I sincerely applaud. The devs went as far as to investigate how the light is actually split in an NV lens. When light goes through different lenses, it behaves differently (refracts and splits). In order to create a more compelling effect, the creators ran a laser through the lens to learn the pattern of the dispersion of light, and, based on that, were able to reconstruct actual night vision interference in the new Call of Duty. 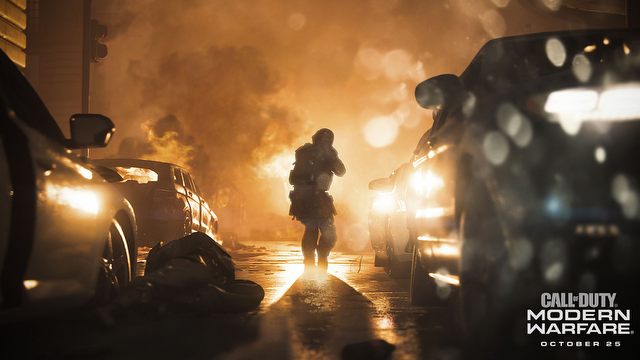 The simulation of infrared we mentioned was also used in the game. Our eyes aren't actually able to perceive infrared light, as it's below the visible electromagnetic spectrum. Only equipped with appropriate gear can we see waves of this type. This allows not only to see things nobody can see, but also to emit light that can be spotted only by the right person. Thus, in the new Call of Duty, you can see shadows of characters at night thanks to night vision. What do you mean shadows at night!? Soldiers have IR lights mounted on uniforms. Although invisible, the infrared works just like any other light, so it also casts shadows  which are only visible through NVG. Things are similar with IR sights of certain types of weapons  we can see them when we put the goggles on. If that's not called attention to details, I don't know what is.

Want more? Well, how about the fact that different NVs show night differently. Older models will be less efficient as theyre based on outdated and unreliable technology (significant blur and artifacts). Let me stress that again: it's incredible how much works been invested in this single, after all trivial, aspect of the game. It's not just that the devices differ from each other, but even the waves they emit have different numerical values! This allowed the creators to distinguish how individual materials reflect infrared light (some will appear white, others more towards grey).

THE FATHERS OF CALL OF DUTY

What are the origins of the Call of Duty? At first, there was Studio 2015 Inc., which also developed the classic Medal of Honor: Allied Assault. After that game was released, a conflict arose between the devs and the publisher (Electronic Arts), and so part of the staff, including Vince Zampella and Jason West, founded a new studio, under the auspice of Activision. This studio was none other than Infinity Ward, which gave the world the first installments of Call of Duty, the Modern Warfare sub-series, and then Ghosts and Infinite Warfare.

Interestingly enough, part of that team, headed by Vince Zampella, returned to Electronic Arts in 2010 to establish Respawn Entertainment, a studio that has since created two installments of Titanfall, and the recent hit, Apex Legends.