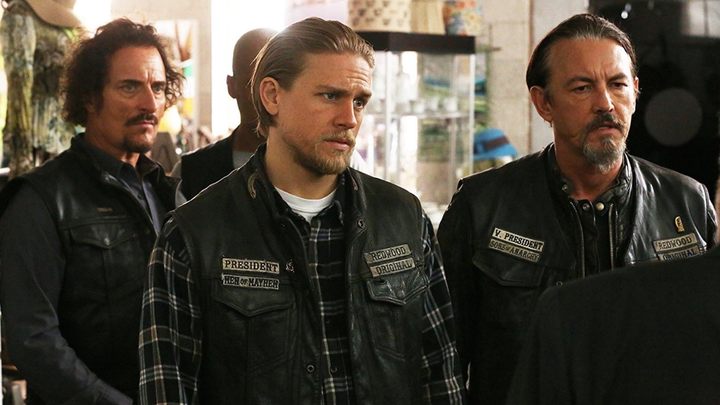 Sons of Anarchy were at the forefront of a new wave of gangster and crime dramas alongside the bald chemist with a knack for cooking meth. And although the series is a little stretched towards the end, the glory of their first seasons cannot be taken away from them.

Kurt Sutter as a creator seems to constantly paly Russian roulette. The show goes from phenomenal to completely blown. Sons of Anarchy are a rollercoaster. Jax Teller (Charlie Hunnam) is a biker Hamlet. He rides in the colors of his club, but at the same is plagued by moral dilemmas, doubts and insecurities. He's a great kid caught in the middle. The action begins as Jax reads the journals of his late father, the co-founder of the gang. This is the beginning of a dramatic journey towards destiny.

The true soul of this show is drowned in the roar of bikes  inspired by Shakespeare's works, carried to the present day. The whole thing was nourished with a sea of blood (which the famous playwright did), tons of guns, drugs and nudity. There's no taboo here, so be ready for it. The show, yes, had its flaws, and it has lost a lot of pace in later seasons, at times turning into a tiresome and chaotic slaughter, but when it was working right, it was quite astonishing.

If you're willing to let the show's mishaps slip, you're in for a real ride. It offers a set of wild, charismatic antiheroes that you're rooting for eventually. The soundtrack is just perfect. And with it all  and a pretty good ending  the Sons have made their mark on television.

While travelling with the Sons, we got to know the other club  the Mayans. Kurt Sutter dedicated the Mayans M.C. spin-off to it. So far we've had two seasons. Interestingly, plans for a prequel to Sons of Anarchy, dedicated to the gang's founders, were abandoned.