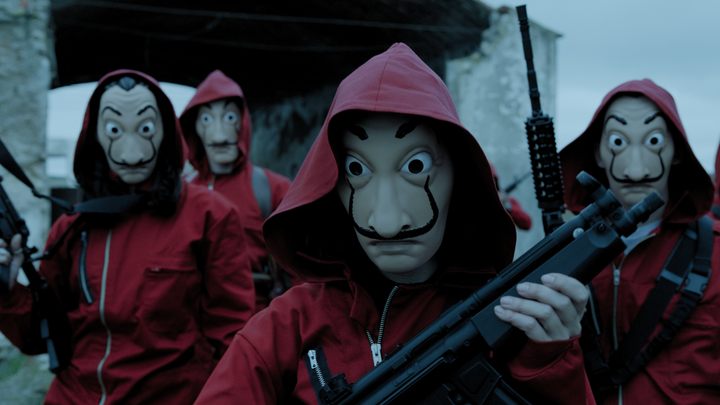 Not to be confused with "House of Cards," which went down with a bang after Kevin Spacey was accused of sexual misconduct. No. La Casa de Papel is a very solid, dynamic and engaging production about thieves, produced in Spain and gathered a devoted following. Because what's not to like?

We begin with a cool, headstrong and complex heroine whose difficult life has pushed her down a criminal path. Úrsula Corberó as Tokyo mesmerizes with her riveting performance. Both when she plays a vulnerable woman and when she oozes unstoppable, cold energy. Then even more so. She is accompanied by a band of broken, equally twisted and intriguing characters. With this team of eagles, led by a mysterious professor, they want to break into the Spanish mint.

The preparations for the heist are engaging, and it only gets better. The story is fast, the twists are surprising and keep it intense for the rest of the show. La Casa de Papel is checks off the mandatory milestones of the genre and gives you some clichés that would be hard to swallow in any other picture. On top of that, we get a lot of small-big stories, good pacing and interesting characters.

We're still waiting for season two (or season four, because each season is divided into two parts) to reveal all the cards  and see for yourself whether Money Heist really has the legs.