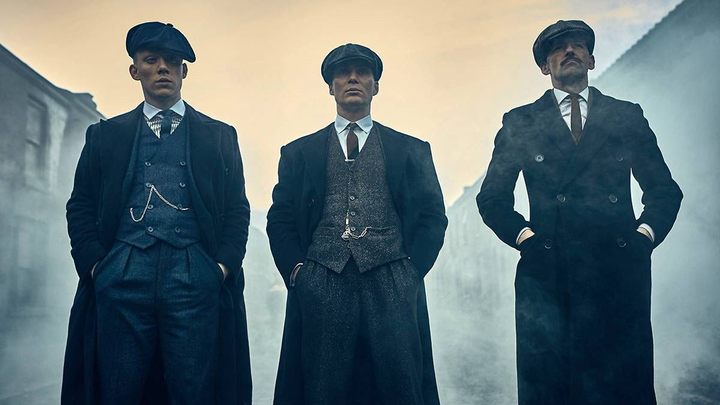 Crime corrupts everyone. But Thomas Shelby of Peaky Blinders was corrupt from the very beginning. We know from the beginning that something is wrong, that even a real gangster couldn't keep it this cool. Shelby's composure is a result of the trauma he brought from the trenches of World War I; insomnia, addictions and the pursuit of adrenaline. All that hidden behind the facade of the cold countenance of Cillian Murphy (Inception, The Dark Knight trilogy)  the perfect actor for the job.

The merits of the production from BBC don't end there. Peaky Blinders offers a slew of well-written and well-acted characters. It's a charismatic bunch of criminals, and people who are about to become them  even if they wear badges... We follow them with unflinching interest, because the plot tends to be entertaining, inventive and engaging as hell. On the one hand, we watch the characters descend into darkness, on the other, as they grow stronger and confront other gangs, the corrupt law enforcement, and each other. But no one here pretends to be good. Sure, they stick together because they're a family with a past, they try to stick to certain rules, but at the end of the day, this world breaks everyone. Unless it's Thomas Shelby. Thomas Shelby breaks the world himself.

The story is a little similar to Sons of Anarchy, only more concise and polished, with Shakespeare replaced with faint, gypsy mysticism and crude one-liners of gangsters damaged by life.

If that's not enough, Peaky Blinders just owns it visually. The shots are a collection of paintings that you could hang on the wall. Everyone's dressed in glamorous costumes, and the set was brought to life with lots of atmospheric details and extras doing everyday work. It makes you feel like the Shelby family is fighting for a place that's alive. The momentum of the story is boosted by strong, guitar-driven music (ranging from Cave's ballads and blues metal feats from Blues Saraceno's). By Order of Peaky Blinders  watchit!