Other easter eggs, difficult to classify 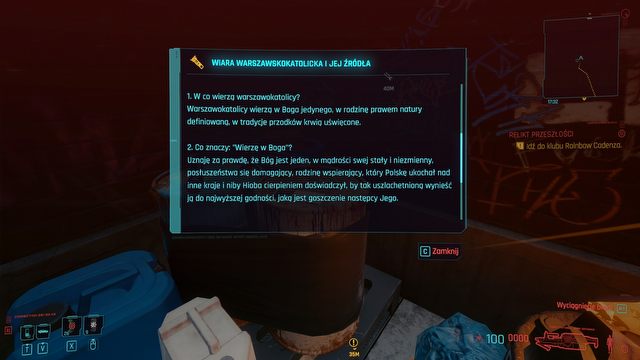 At one of Japantown's marketplaces, you can make a real discovery of Polish civilization and religious influences in the American Night City. It is a shard on which all the dogmas of our national Christianity, Warsaw Catholicism, are written down. Its most likely the developers statement on the growing Catholic fundamentalism of Poland. 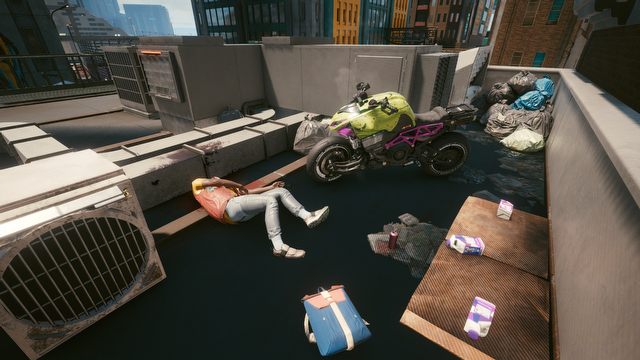 Developers from CD Projekt Red included absolutely everything in their game  they even dug up an old internet meme about a certain Paul Jumper, a kid who, attempting a bicycle stunt, falls down and almost gets himself killed. The clip is 11 years old, while in Cyberpunk it has been 71 years since its publication and people still remember it.

At least this is due to a shard that can be found on one of the southern Heywood roofs in Glen. From its content one can conclude that Paul's successor, Pablo Jumper, repeated this trick, only with a motorcycle and a much more tragic result. His body is rotting on the roof and an unusable smoky vehicle stands next to him. And this time it could be said loudly "its rolling," because the accident was to be used as braindance material. 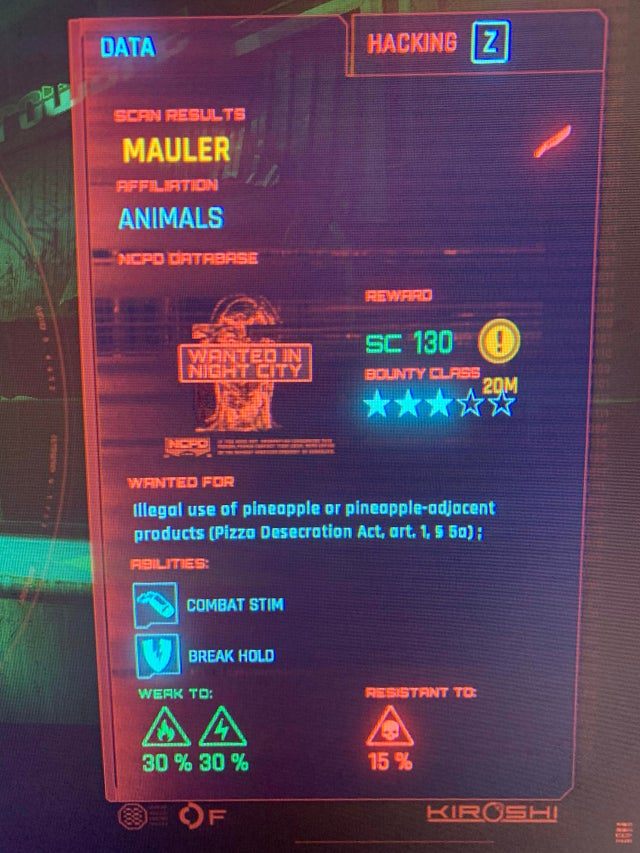 The dispute about the appropriateness of the presence of a pineapple on pizza has grown to the rank of one of the biggest Internet discussions in recent years. Most people do not even want to think about the fact that this tropical fruit could spoil the taste of a classic margarita, but a handful of lunatics still think this combination makes sense. It's good to know that in Night City they took good care of the case and made Hawaiian pizza not only banned, but also punishable by imprisonment.

We know this from a scan of Mauler, a member of the Animals gang. After proper verification with the help of a Kiroshi scanner, we can find out that he is wanted for illegal use of pineapple and all pineapple preserves (according to the Pizza Regulation, Article 1, paragraph 5a). What will we do with this knowledge? I don't know about you, but I think the criminals belong behind bars. With no exception.

I really like easter eggs, although I confess that I have never been one of those who comb through every angle in a game just to find them. However, I did so in the case of Cyberpunk 2077 and it gave me a lot to think about, because most of these references are really nice and do not seem to be added at a push. Even Pablo Jumper's presence here has been justified by the plot. Kudos, CD Projekt RED.