And some more games 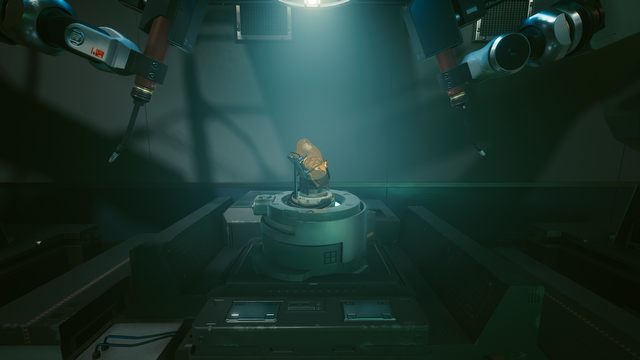 It is worth to follow the side jobs related to the River's storyline. First, because he's just a cool guy, and also, because the jobs completed together with him are usually highly engaging detective investigations. Moreover, one can come across great easter eggs, in the double sense of the word, because it is indeed something like an egg, but one that is so oligoleptic with a highly developed embryo. I guess you can even call it a child.

Of course, I was trying to make this description really impressive, because we are talking about the Bridge Baby from Death Stranding, and as you know, this game is not one of the most regular titles on the market. Where can we find this peculiar baby in Cyberpunk 2077? All you have to do is search all the laboratory rooms in the building that you break into with River during the "The Hunt" job. It is hard to miss, because it stands out from its surroundings. We can even scan it to read out the following message:

FUNCTION: This device simulates conditions in the uterus

INTENDED USE: Maintains the life of the BB and detects BTs.

THE COMMONWEALTH OF BOTH GAMES

Death Stranding and Cyberpunk 2077 express fondness of each other. Kojima Productions devs have even recently prepared a free update to their game, which has added a couple of cosmetic items and role-playing missions directly related to the RED Project CD production. Some say that these titles even share a common universe, so that the above easter egg would not have to be so random. 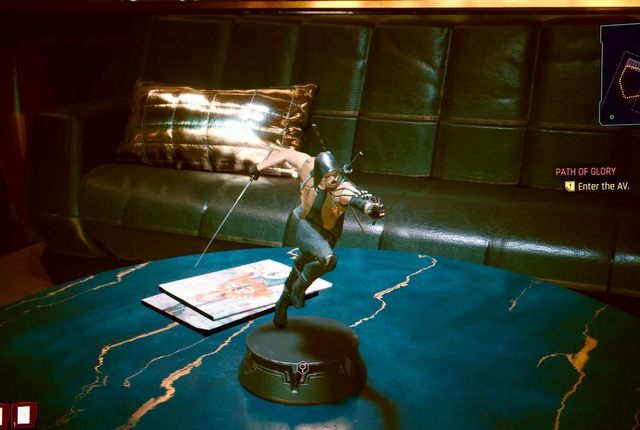 If you decide to get to know Panam better and help her and a group of nomads in a few heists, you will probably meet two good friends of the mentioned heroine  Scorpion and Mitch. The name of the former is not coincidental, because it resembles the same well-known character from the Mortal Kombat series. Sure, he doesn't cover his face, but his hood along with the black and yellow clothes loosely reference the outfit of a fictional ninja warrior.

Scorpion appears in the further part of the game as a figurine, which can be used to decorate V's apartment. There is one condition  you have to do a side job for Mitch, a nice guy, who's waiting in the middle of the Badlands under one of the exclamation marks (provided that we have already made enough progress with the Panam's storyline). You will receive the mentioned figurine as a reward for completing this task. 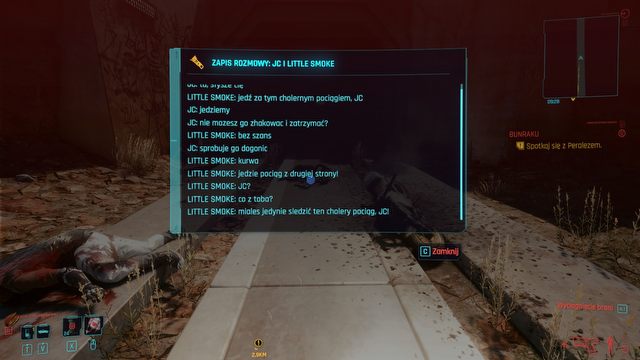 Some players predicted that Cyberpunk 2077 will be a simple clone of the Grand Theft Auto series, but I guess everyone realizes today that these are two completely different games that share only the ability to move freely in the open world (and the police system, but it's better not to mention it). Nevertheless, the CDPR studio give us some hints along the way proving that Polish developers are quite familiar with GTA games. So familiar, in fact, that they reference one of the most legendary dialogue lines in the history of the aforementioned Rockstar's series.

"All you had to do was follow the damn train, CJ."  I think that those of you who played GTA: San Andreas read this sentence with Big Smoke's pissed off voice. Well, imagine that a similar scene also happened in Cyberpunk , although in a slightly more tragic way. Outside of Night City, by the railroad tracks, you will find the corpses of two guys, Little Smoke and JC (a subtle opposites of the names, wink wink), with a record of their conversation, which you can see in the picture above. I guess I don't have to add anything.