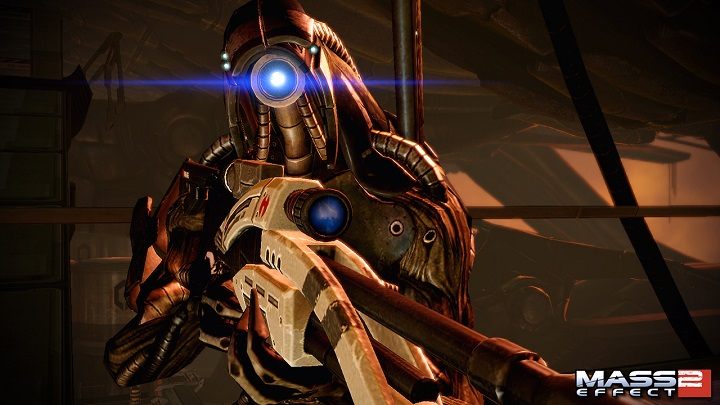 Legion is one of the most interesting companions in the entire trilogy, and we spend the entire first part killing his kind. Smalltalk on the ship must have been awkward.

No matter if it's a book, a film or a game, much of the ambitious science fiction – and Mass Effect definitely strives to be considered as such – sooner or later addresses the question of the free will of artificial intelligence. In the case of the BioWare series, this theme primarily concerns Legion: a robot who joins the team in the second installment and plays an important role in the final chapter of the trilogy. Legion is a geth, a race of sentient machines that function through a single combined artificial-intelligence hive mind, whose representatives can gain their own consciousness as separate, intelligent, synthetic creatures.

This, in turn, greatly complicates the first part of Mass Effect, where the geth served as one kind of generic cannon fodder. It's like having players kill bandits throughout the first Uncharted, only to find out in the sequel that the opponents are, in fact, looting just to raise money for a transplant for little kittens. It is much harder to have the satisfaction of killing the geth when we realize that they are on the verge of becoming living creatures, capable of noble gestures and great sacrifices.

This loose end of the lore was tied in the excellent second entry in the series, where we’ve learned that the geth, who followed rouge agent Saren Arterius, were in fact only a faction indoctrinated by the Reapers – the remaining geth tried to find consensus in the obscurity of The Phoenix Massing nebula. But that makes them seem even more compassionate: barely have they liberated themselves from the rule of their creators, the Quarians, and they’re already being taken advantage of by ancient machines with genocidal tendencies. And to make things even less enjoyable, during Legion's loyalty mission in Mass Effect 2, it turns out that the "heretics" can be reprogrammed to counteract the Reapers' influence. So it looks like we killed them all in the previous installment of the series completely unnecessarily! Well, at least Legion doesn't blame Shepard too much for killing so many of his kin.