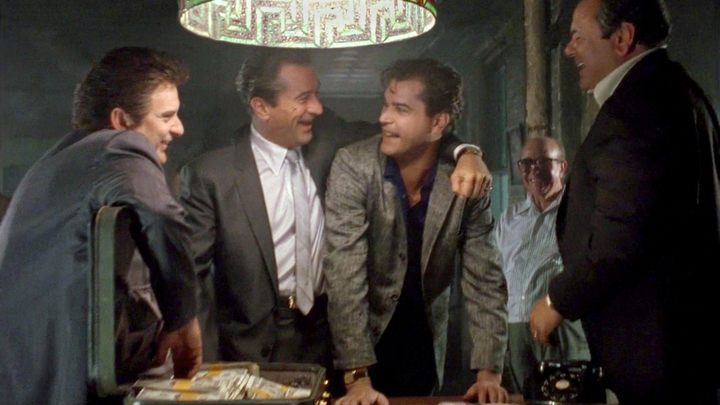 Sometimes you get the impression that Martin Scorsese's films are plagued by the same curse as Oliver Stone's and his Wall Street. The other director wanted to film a warning against predatory capitalism, but in the meantime he made a contribution to building a lifestyle he despised. Martin Scorsese did not publicly express similar regret, but his works magnetized with even greater force and tempted with the goods offered by spoiled worlds. Because the audience, oddly enough, tends to forget about the endings.

One of the best films in this director's career is one of the exceptions (the fact that sometimes you get the impression that Scorsese makes the same film every time...)  Goodfellas. Yes, we land again with the main character and narrator  Henry Hill (Ray Liotta)  in the world of fake brotherhood, great money and luxuries, which you only need to reach out for. Although the script does not evaluate the actions of dramatis personae, it is easier for us to draw a conclusion as to what price well have to pay if we get into such a life.

We learn the story of Henry Hill, who begins his first years as a minor street thief. He impresses his "family" with his loyalty, and then with his cunning  and begins to advance on further levels of criminal career. Goodfellas have not only a strong story, but also Liotta's great performance. We can't forget the amazing Robert De Niro, one of the director's favorite actors. You may find everything here, cause the movie is at once cruel, funny, sharp, and, above all, impressive. In short, it is Scorsese in purest form.