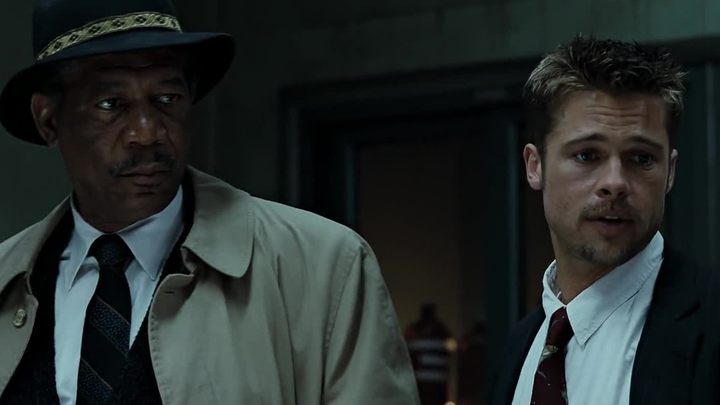 David Fincher was involved in sin and human distortion for a long time before he joined Netflix, which gave us House of Cards with a bold but now largely despised Kevin Spacey. Se7en has already dragged us through the meanderings of our dirt and human meanness. So it wasn't about costumes and the White House. But Spacey was a perfect choice. More than ever.

Seven (Se7en) is a dark detective thriller in which all the elements combine into a one piece in the end. We've got two cops. One is a tired of living old and experienced scumbag (Morgan Freeman... it's funny that he took a role as God in another movie a few years later). His partner is angry, young and slightly confused (if someone still does not believe that Brad Pitt can act  I recommend watching Se7en). And there's a crime they're trying to prevent. More people die  and the method of death of new victims refers to the seven deadly sins (all the victims have sinned).

It is a terrifying clash of ideas, human psyche and a race against a murderer with Kevin Spacey's face  who represents very disturbing currents of thought (who would have thought that some of these disturbing facts ended up true in last years...). And mercilessly points out the corruption of modern society. Apart from the plot and the message, the atmosphere, shots and music are also impressive. This film does not allow indifference. Or joy.

Fincher has made some very good movies including Alien 3, Fight Club and a similar to Se7en  Zodiac. The title referred to an authentic serial killer who was active in the United States in the 1960s of XX century. He was never caught, although several suspects were questioned. In this case, Fincher starred Jake Gyllenhaal and Robert Downey Jr.