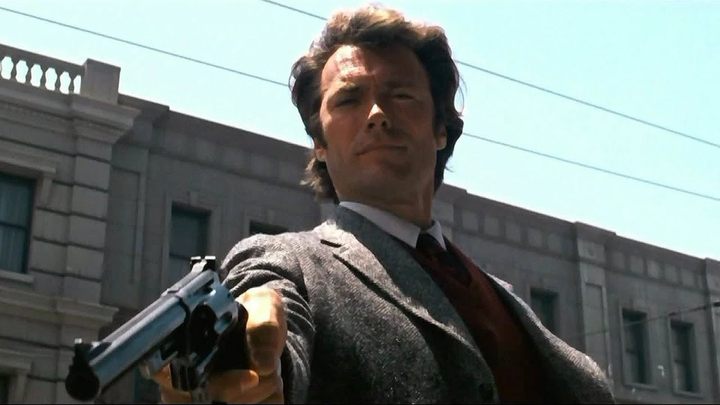 Sometimes it's not enough to have an intriguing plot for a good detective story, a good atmosphere or even an interesting psycho who makes the neighborhood fearsome. We need the main protagonist too. A blood and bone detective who ties all the threads together, looks into the psyche of a madman, shows genius, warms up his mind to redness and catches the elusive criminal and bring him or her to justice. Or, he could also solve it like Dirty Harry  with a 44. Magnum bullet.

Meet Lieutenant Harry Callahan (bet you know him from your hipster friend's T-shirts). This is a policeman using methods that could be called unconventional, and it would be putting it mildly. For criminals, he was ruthless and brutal. And only he could stop Scorpio, who was raging in the streets, shooting random people like the abovementioned Zodiac.

Dirty Harry is nice to watch today, but back when the movie was release, it was more than a movie. It addressed some very serious needs. On the one hand, crime and anarchy grew in the US. On the other, a lot of trust in power and justice had been lost. Such a dark redeemer with a fierce glance of Clint Eastwood, who absolutely ruthlessly took the lives of the bandits, gave some illusion of security and a catharsis. Even if just for the two hours on a screen.