Talk to me, Judy

Once upon a time, Rockstar's L.A. Noir revolutionized facial animation, allowing characters to express full range of emotions in a much more realistic way. It all happened back in the time of Xbox 360, so the technology couldn't have been procedural at all. Oddly enough, the idea didn't stick around, and so we can still watch close-ups of emotionless faces of inanimate dummies even in the most expensive AAA productions. Cyberpunk 2077 is revolutionary in similar way, but in terms of RTX! 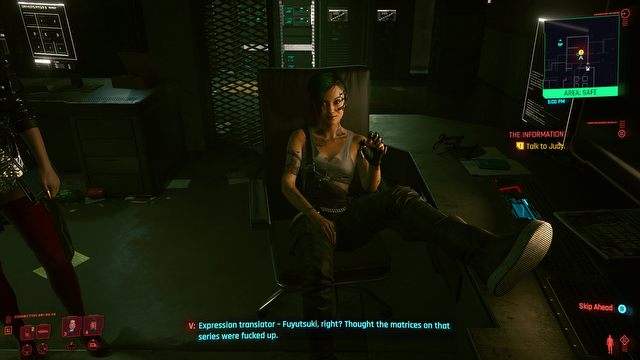 Cyberpunku 2077 features some of the most realistic NPC animations.

In terms of facial animations, in turn, NPCs in 2077 are ahead of other games by a whole generation, all thanks to a special technology of procedurally generated animations. It's not only about facial expressions matching the current emotion, syncing the lips with words, directing the gaze at the player, but also about the whole behavior of our conversation companions. Nowhere else have I seen such natural movements and behaviour of NPCs. They sit, get up, walk, stare at their computer screens, naturally interacting with their environment and having a conversation at the same time.

The first moments with Jack are already impressive, but the conversation with Evelyn and the meeting with Judy can really drop your jaw. And imagine this game in VR! Crazy. Another great example is the scene in the bar, when we see Jackie nervously twitching his leg. Everything the NPCs do is totally natural. We're never snatched out of our character's shoes by transitioning into some sort of dialogue mode, making us watch a talking head. We live in this world, we are one of the people of Night City, we really are V.