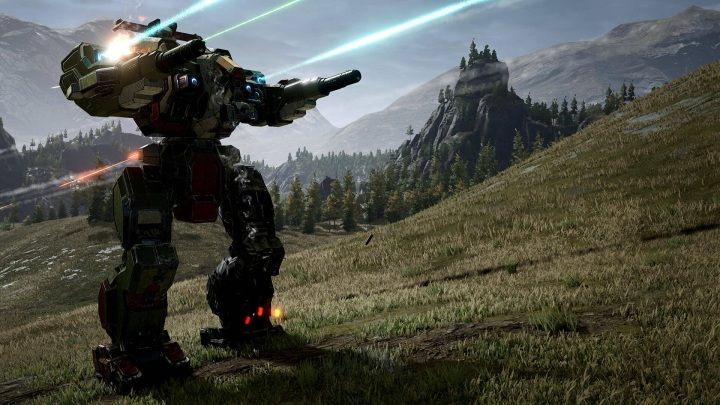 What is MechWarrior 5: Mercenaries?

Another part of the classic series of mecha simulators, the history of which began in 1989. The most popular cycle enjoyed in the nineties, subsequently disappeared for many years from the calendar, to return in 2013 due to an on-line game, MechWarrior Online. MW5: Mercenaries is created by Piranha Games, which owns the rights to the MechWarrior franchise since 2011.

What does the gameplay look like in MechWarrior 5: Mercenaries?

Although the title focuses on the battles of futuristic mechs in fictional realities, the level of difficulty resembles simulations of real vehicles and quite effectively reproduces the feeling of sitting at the helm of a big robot. The main point of the game is a campaign in which we control a mercenary, freely choosing targets from different sides of the conflict, guided mainly by money. Destroying specialized objects on the battlefields, we get money that we can invest in repairing and modifying mechs, or buying brand new machines. Over time, we will hire other pilots, and in addition to personally participating in the battles, we will also manage their activities and the finances of our growing company.

In the mid-90s, The MechWarrior series pushed the cutting-edge of computer graphics under the auspice of Activision; today, MechWarrior 5: Mercenaries is likely to cause minor interest. Piranha Games is a studio that enjoys very poor opinion among players, and the exclusivity deal with Epic Game Store only adds insult to injury. Controversies aside, controling mechs in MechWarrior Online was implemented pretty well, and based on reviews of the just-released MW5 demo, things look equally good, with the main problem being about weak AI and a primitive interface. If, by some miracle, the final version of the game will be decent and without critical errors, we will be surprised.