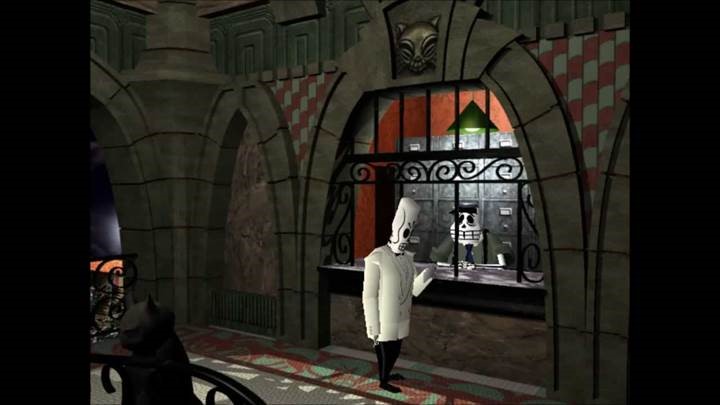 It's hard to find a better example of a game that's universally cherished and unanimously appreciated by players, critics and other developers, and at the same time selling so poorly that the financial failure burried the entire genre. Grim Fandango was remastered – in 2015, the Double Fine Productions project was warmly received (the screenshot here comes from this version). It didn't sell well either, which only confirmed the sad conclusion from years before – even if classic adventure games have not died yet, they have been relocated from mainstream to a narrower niche.

The main character of the game is Manny Calavera, a refined and extremely sarcastic dead man, forced to work for the Department of Death because of the sins he commited during his life. One of his tasks is to find the Mercedes Colomar, which the protagonist follows during the first few years of the story. There are plenty of twists and turns, original heroes and an extremely charming lore. It's a pity that the interface is not the most legible.

In retrospect, we can say that the game's adventure format was also harmful. Even the best storyline can become boring if we have to peruse locations in search of the most basic items. It also doesn't make the world feel any more believable. And it could have been so nice! Aesthetically, it's a mix of Aztec art, Tim Burton, and Mexican folklore. A cinematic version of this game would have a great chance for an Oscar. Grim Fandango only won for a place in the hearts of the most loyal fans.

It will be nothing original to admit that when choosing a game that I will devote my time to in the first place, I am not guided by sales, but by the rating of users. With all this, however, I realize that my favorite titles may not be continued due to financial results.