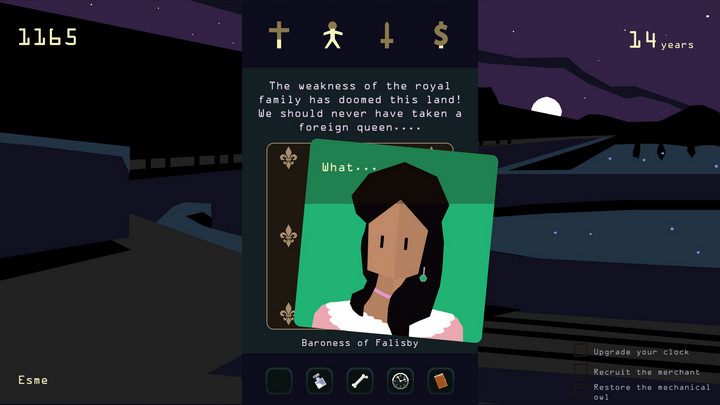 The only game in this lineup that started out as a game for smartphones. A PC version is available, but I wholeheartedly recommend playing on mobile, because only then can you fully appreciate one of the distinguishing features of the whole series of Reigns, namely the "Tinder mechanics."

Yes, you read that right  the game is about making decisions by scrolling the current card left or right. Each choice affects one of four parameters that each ruler, or, in this case, the consort, must take into account  the satisfaction of the church and the people, the state of the treasury, and the level of ruthlessness. If any of these parameters reach their minimum or maximum value  you die. And that's what the game is all about. You get lost often and in different ways, and by discovering new, unique cards, every once in a while, you can reveal new kinds of descent from this world. 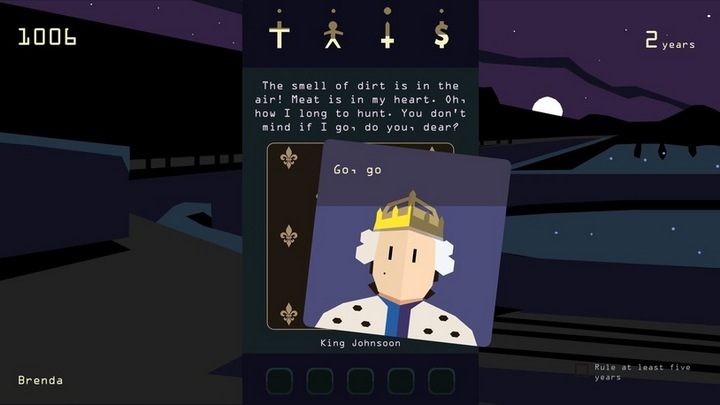 The game encourages experimentation with mechanics, and at the same time in a kaleidoscope of successive queens  drowned, walled up alive, devoured by dogs or burned at the stake  there is an interesting intertextual plot, which plays with convention and sometimes breaks the fourth wall. Failures are at the same time successes, and the game is a nice title to enjoy during a journey.

Reigns: Her Majesty gives you simple tasks to do, but it's up to you if you want to complete them. The game can be played in many ways  either by optimizing governments to sit on the throne for as long as possible, looking for more and more crazy causes of death, or simply playing with the fantasy of being a capricious queen who does what she wants until the people grab torches and pitchforks.

The first game I ever saw being played was Dyna Blaster, played by my dad a million years ago. Writing this article, I tried to imagine what it was like to play games without having all the knowledge we commonly have. Explaining what video games are about to my mom was definitely helpful.