Exactly. Who, in their right mind, would play such a game? The game attracts a very unusual audience. In Naval, You can meet plenty of retired military, intelligence, and defense workers, aged 50-80 years, who do not complain about the lack of free time. Seriously, I've been playing MMO games for 20 years, and it's the first time I've encountered such a curious lot of players. This group isn't particularly keen on sinking your ships, but is certainly unique in terms of marine knowledge, and derives great pleasure from trading and earning digital gold. Suffice it to say that a Canadian I was in clan with earned so much that he literally broke the game. Devs had to manually change the records in the database and reduce his assets, because the game was just not ready for such sums. 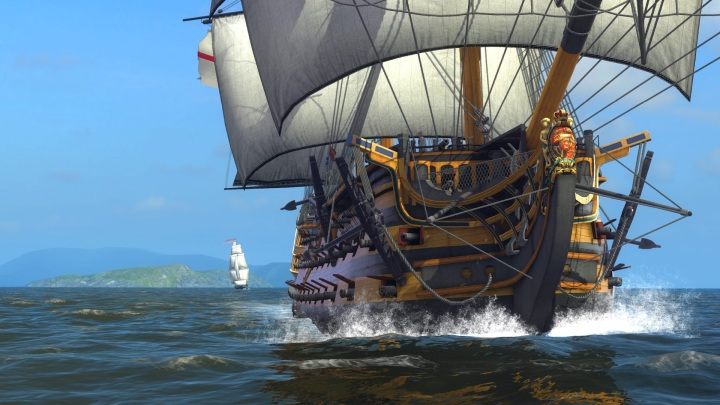 Sometimes, the only way out is escape.

Another very large group is, in general terms, citizens of the former Soviet Union. These are generally people who have not had it very easy in life, and they're just the perfect sailors, able to endure the hardships of maritime life. They rule supreme on the game's servers. Where they can't win by skill, they win by sheer numbers.

In addition, we find representatives of all nations that aspired to become maritime powers in the past, such as Great Britain, France, Spain, or Sweden. However, it seems they're on average much older than in the case of other popular MMO games. It's mostly people around 30, 40 years of age, rather than 20 year-olds and teenagers. Sure, they, too, appear in NA, but unless they're really in love with the era and setting, they usually quit soon. On top of that, the vast majority of people with whom I've had the pleasure of sailing are fans of ultra-realistic flight simulators such as DCS or IL-2 Sturmovik.

All in all, I have to admit that this older band of players create a great atmosphere for shared misery. I'd rather suffer while discussing serious matters with a former Australian ASIS, a former US infantry soldier, or an architect from Germany, than play with a yelling teenager. In addition, the level of dedication required by the game is incomparably higher than regularly. It's not unusual for players to use multiple accounts  even as many as six! Dedicating hours and days to achieve something.

THE ADVANTAGES OF THE MULTIPLIER

Generally, the goal of having multiple accounts in Naval Action is material profit. In this way, we can have more buildings producing raw materials in the ports and have a larger merchant fleet. In addition, it's easy to have alts in other nations, which further increases the potential for making money. There are, of course, extreme cases, such as the player named Lenin God of PvP, who successfully manages to control three ships in a single battle. Skill level  SPACE.

Is it worth suffering?

Finding brothers and sisters in suffering helps to endure the hardships that await everyone in the game from Game-Labs, but is this enough? For me, and for the vast majority, certainly not. Yes, it helps, but true satisfaction is brought by inflicting suffering upon others. Oh yeah... When, after hundreds of hours of fighting for money and ships, and countless lost battles, your skills reach the ZEN level, you start to literally feel SOMETHING. There is nothing better than sinking noobs, feeding on each vile curse they throw you, when you calmly give them another round of cannonballs in the stern. Makes you feel alive.

I've been playing Naval Action almost from the very beginning of the alpha tests, probably a month before the game became available on Steam. I have two accounts, and the main one counts over 4 thousand hours. Info about the second account will remain my sweet secret. I'm currently sailing under the banner of Great Britain, hunting mostly pirates, but I'm not very picky when it comes to sinking suckers down.

My colleague from the next desk is directly responsible for the loss of many hours of my life. He's the one who, after much persuasion, dragged me into the game, got me hooked, and then left me, because it was too demanding. I officially declare that I forgive him.

My colleagues know that I have an unpleasant way of often asking "How are you? If my knowledge of Przemyslaw Bartula was based solely on his answers to this question, I would have to believe that sinking ships is the only thing he does. We have already heard several hundred sea stories about groups of ships that sank in an unequal battle with the great captain Bartula. But he never talks about friends, vacation... Can anyone link me to the definition of addiction?