Space – the final frontier. Its vastness constantly stimulates the human imagination, serving as inspiration for numerous books, movies, and video games. This thought of exploring distant corners of the universe has caused an explosion of creativity in Fenix Fire, a small, relatively unknown developer studio. The latest work from this 3-member team – a unique space survival game entitled Osiris: New Dawn, a good chunk of which can already be experienced thanks to Steam's Early Access program, manages to encompass a plethora of innovative solutions and some high-quality Martian aesthetics. Innovative mechanics and beautiful graphics won the game its first awards in less than a week after the release, and subsequently attracted the attention of thousands of players. The game, even in its current form, amazes with its scope, but the creators' plans concerning Osiris are much more far-reaching.

The action of Osiris: New Dawn is set in the year 2046. With the development of technology, humanity has gained the ability to venture outside the solar system and study the surrounding planetary systems. Situated relatively close to the Sun, the Gliese 581 system was the obvious target for those expeditions. After the failure of the first mission aimed to colonize the system, we take part in the second attempt. Unfortunately, it also proves to be less than successful. Having reached the system, our ship suffers a malfunction and crashes on the planet Proteus 2; we in turn find ourselves in a damaged suit and equipped with only a few basic items as we wake up on the surface of the unexplored red globe... 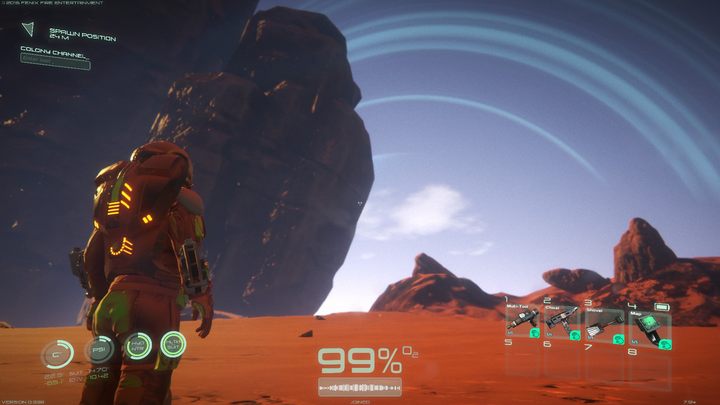 A whole new world to see.

Our first task after the disaster is, quite obviously, to secure our basic needs – repair the suit and set up an inflatable shelter. Having dealt with that, we proceed to carefully explore the world, enjoying the view from either first- or third-person perspective. The landscape of Proteus 2, so far the only available planet, closely resembles Mars; it is, however, much more varied than Earth's neighbor and, what's most important, it’s populated, not necessarily by friendly creatures. The planetary surface hides many resources which are the basis for a complex crafting system – the key element of the game. Almost everything in Osiris needs to be created from scratch. Raw materials have to be either smelted in the forge or subjected to chemical reactions to obtain such basic components as steel, glass or plastic; those in turn serve us to build structures and craft more advanced items.

These crafting chains have many individual links and their ends are crowned with some really impressive facilities and vehicles. In our base we may find several different modules – habitat, laboratory, greenhouse, bedroom, garage, as well as many smaller structures and pieces of equipment, such as gas tanks (the planet has deposits of hydrogen, chlorine, and oxygen), a water recovery system, satellite dishes or various containers. In addition, we can build as many as five different means of transport, including a jet scooter, two types of rovers, an armed mech and even a full-size spacecraft. The latter allows us as much as reaching the planet's orbit. 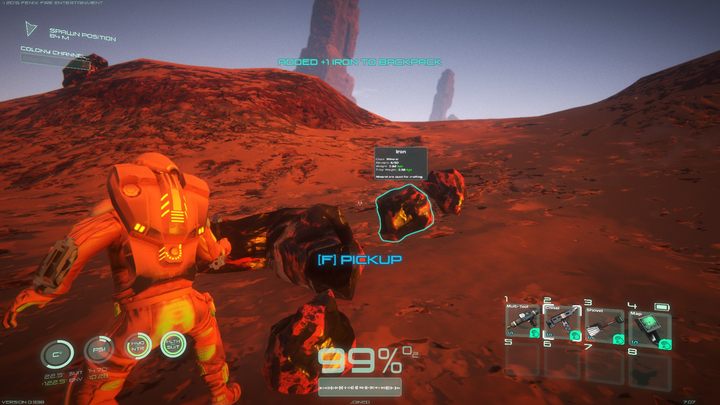 Acquisition of raw materials is one of our main tasks.

Along with the expansion of our colony, our astronaut, who at the beginning of the game is given one of the four avilable classes, gains experience and – like in an RPG – can develop their skills. Which is very useful, because as the colony grows, the local deposits of raw materials begin to deplete and to find more of them we must venture farther and farther from our safe haven. Meanwhile, threats in Osiris are a common thing: Proteus 2 is full of various alien creatures that see us as prey. By day it is usually sufficient to carefully avoid them, or, if we feel up to it, to fight them using one of several types of guns. But when the night falls and the planet gets dark, and I mean really dark, the most aggressive and viciously agile species of predators come out to hunt. That's when the walks outside the base perimeter can cause genuine goose bumps. In addition, gigantic worms, suspiciously similar to those appearing in Frank Herbert's "Dune", roam the planet and can appear from under the ground in an instant, killing everything that happens to be in their way. Fortunately, there are so slow that there's enough time to escape in most cases. 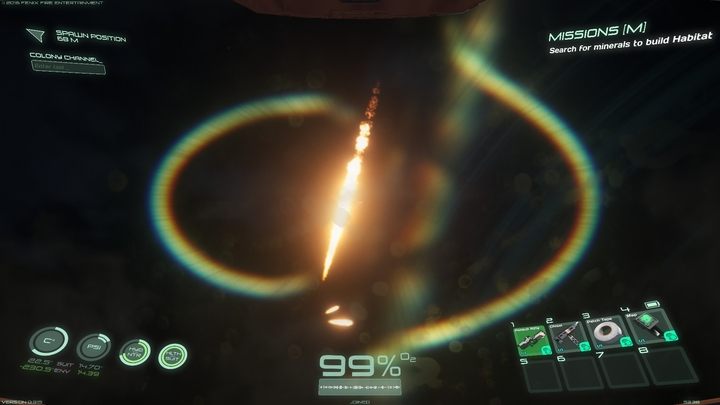 A fiery trace in the sky is rarely good news...

In Osiris, unlike No Man's Sky to which the work of Fenix Fire was initially compared, we actually have a lot to do – the creators have included a multiplayer module alongside the single player mode. The first option it features is a co-op mode, in which we can build a colony together with some friends. If we decide to play on a public and not a private server, we are given the second option – competition between individual players. However, its premise raises some fundamental issues. Astronauts may belong to one of the two factions – the United Nations of Earth or the Outlanders, basically space pirates. This division by itself seems rather childish; and the concept of rebels who are preparing their own space mission which could easily consume the whole budget of a middle-sized state and demands cutting-edge technology only to crash in exactly the same spot as the escapade of united Earthlings is anything but plausible.

Absurdities abound when it turns out that the game can simultaneously host up to 40 players that, distributed across the aforementioned factions, fight and may even kill each other. It is quite obvious that, even if by some wicked miracle several space ships were to crash on the same planet a long way from the solar system, shooting other astronauts would probably be the last idea to come from someone who barely survived such a disaster himself and is exposed to a whole list of other dangers. The concept behind this mode needs some polishing if it is to avoid damaging the game's believability in the future. At the moment, the multiplayer experience is bad, bordering on awful; in addition to vicious lags that impede the gameplay, the players have a hard time finding their way in this premise, turning the mode, which was susceptible to trolling and griefing to begin with, into one big chaotic mess. 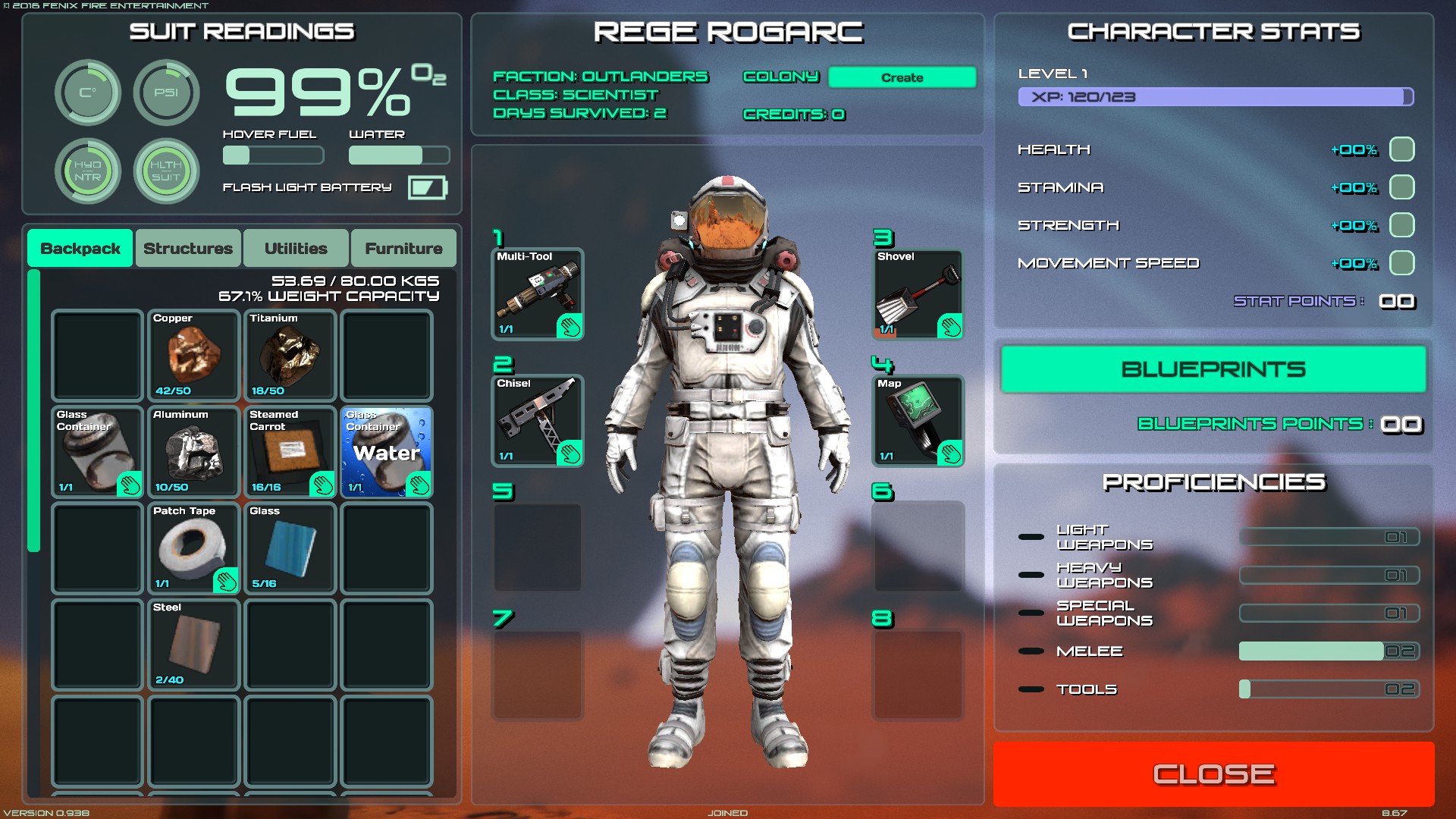 The interface could definitely use a redesign.

Apart from the issue of underdeveloped multi, Osiris: New Dawn is filled to the brim with wonderful, mature atmosphere. Many things work to this effect, both large, such as the beautiful graphics, geography of the planet, or the nights that are dark as bowels of hell, and small details such as the potato in the emergency kit – a humorous reference to the "Martian", the recent movie starring Matt Damon. I hope that the creators will condense the cosmic atmosphere even further, by adding, for example, some movie clips, the option to establish contact with Houston, or at least some kind of basic storytelling.

In terms of graphics, Osiris looks great, which is not surprising, as the founders of Fenix Fire have had their share of experience working at Blizzard as game environment designers. Well-chosen color palette, perfect ambient lighting and rapidly changing weather conditions conjure a truly breathtaking effect. Thoroughly polished are even such details as the red dust that settles on the suit while walking around the planet. Looking at the visual wonders of Osiris, watching as the system's star, Gliese, rises and vanishes over the horizon and admiring the majestic rock formations one wants to shout "Get this thing to support VR goggles, pronto!". The creators, however, are one step ahead of us, having predicted such request and already announced that their game will eventually support virtual reality technology. 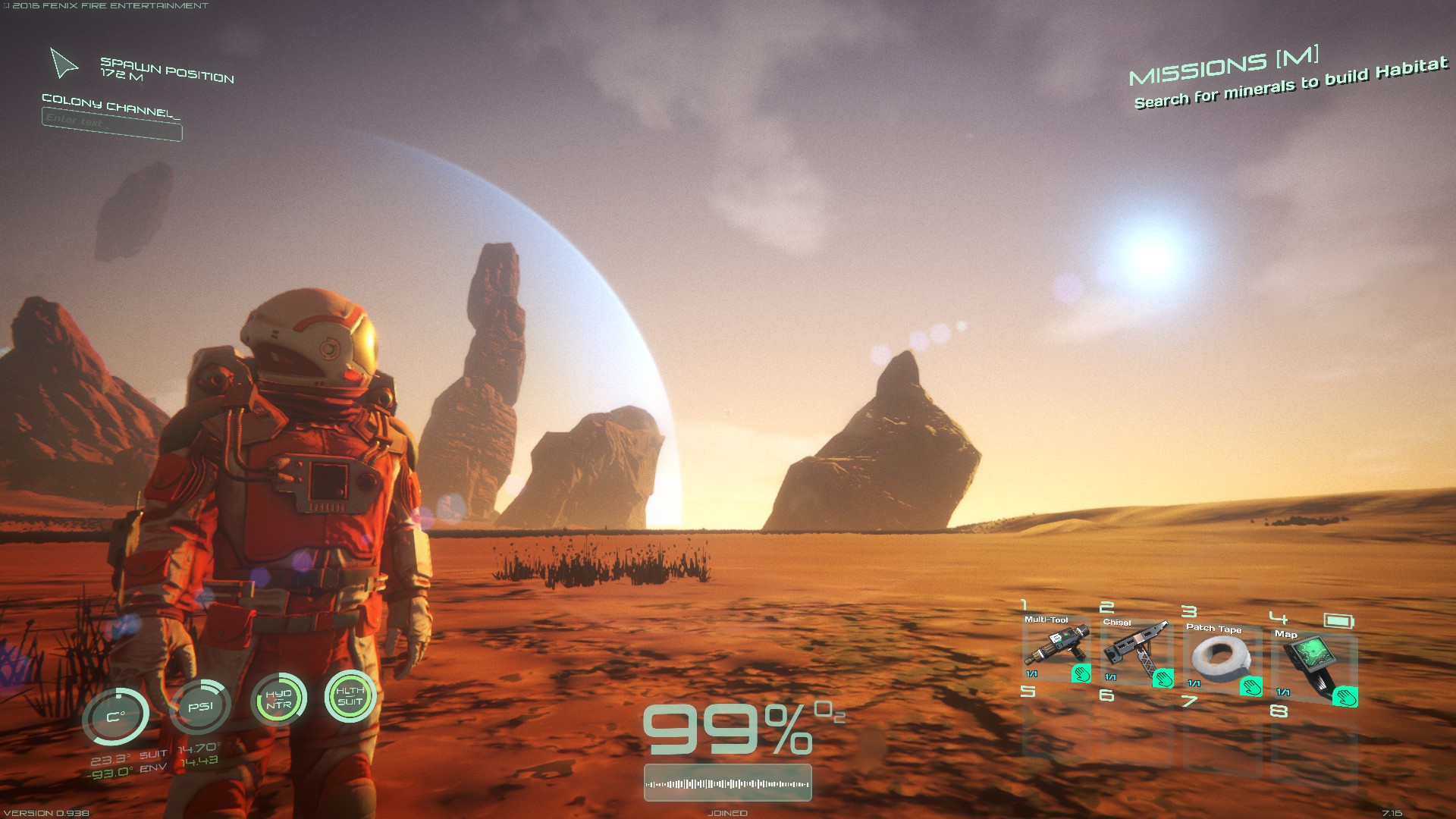 5-minute break to admire the landscape.

Proteus 2 deserves some praise as well. The game area is quite large and is functioning as a single space, without loading screens or fast travel points. In contrast to No Man's Sky, the world was not generated procedurally but has been carefully designed by the creators. Thanks to this, the sites are varied and feel truly unique. Such approach to the creation of the universe will certainly pose some challenges for Fenix Fire further in the course of their work, because it is quite impossible to create an entire globe this way. Currently, when choosing to travel past the vast barren desert surrounding the game area, we will encounter a border at the end of the world, where textures and physics go to die, or at least lose themselves. Such a thing shouldn’t happen in the final version, so other areas will probably have to be created and filled using some kind of algorithm, so that the players can travel around the globe and land anywhere they wish.

Osiris: New Dawn looks pretty good even in Early Access, and the gameplay provides a lot of fun. The creators promise, however, that the scope of the final version will outbid even the players’ wildest expectations. We are to be given the entire Gliese 581 system to do as we please with it, including the ability to travel between its planets and conduct operations on their orbits. We can probably also expect even more structures to build and vehicles to drive. The possibility to build a cage to catch living creatures suggests that the concept of using the local fauna to fulfill our goals will be expanded even further. And that's probably not all that Fenix Fire have up their sleeve. 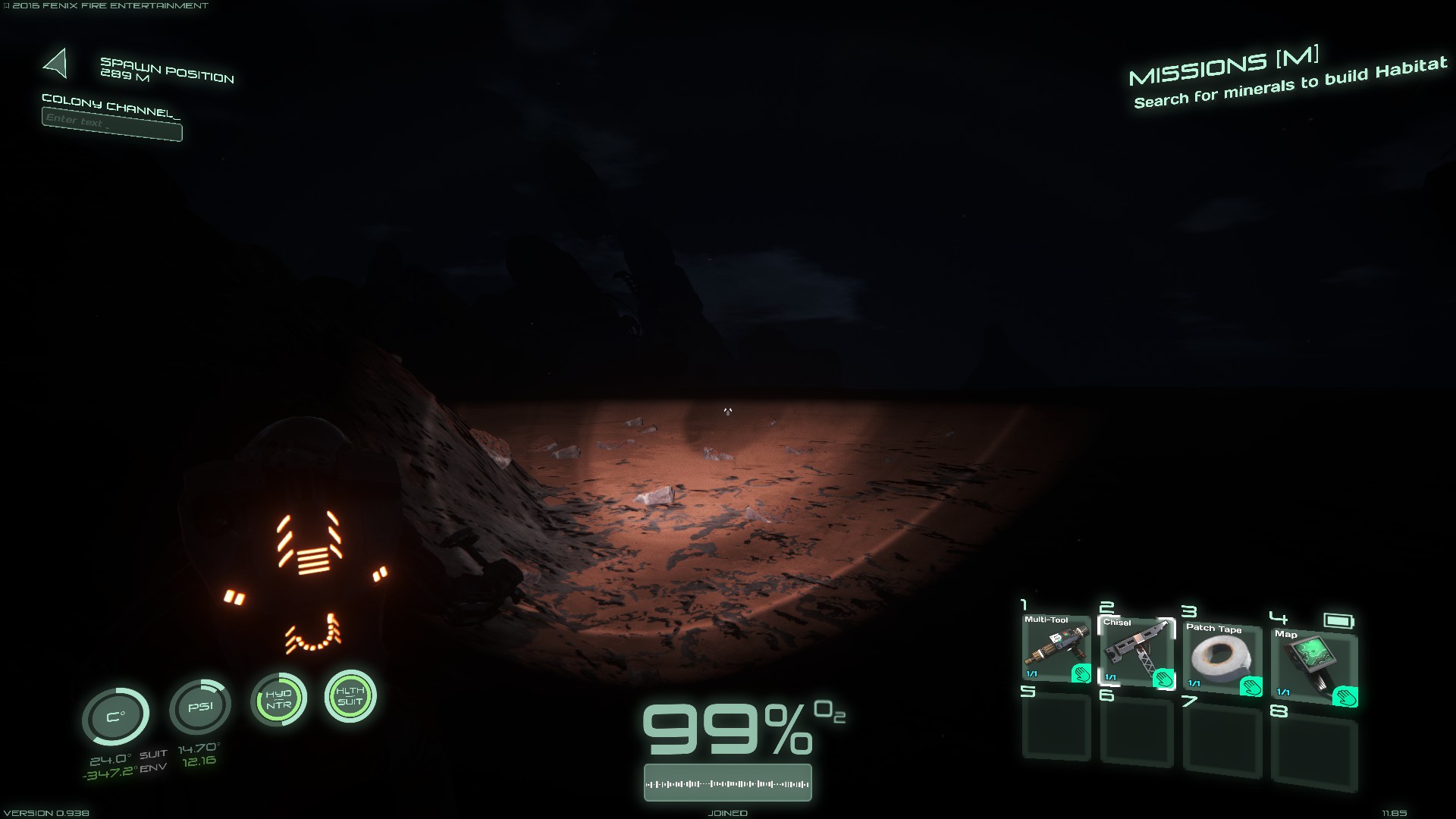 For the night is dark and full of terrors.

Osiris: New Dawn is a game with a truly great potential. Interesting gameplay mechanics and extremely attractive visual side of the production will certainly attract many a lover of space exploration. Despite the fact that the scale of the world is not as gigantic as in No Man's Sky or Star Citizen, restricting the game to a single planetary system creates, ironically, a lot more possibilities to show a detailed, unique and believable universe. At the same time the well-though-out concept of the whole game opens the door to virtually unrestricted addition of new elements, even after the final release. But to be successful, the developers have yet to deeply reflect on the multiplayer formula, successfully eliminate a trove of technical errors, and improve the rough interface, which right now looks as if it was pulled straight from the 90s. The release of the finished game is planned for 2017. Let’s just hope that the good first impression, and a large number of players in Early Access, will help Fenix Fire maintain the right pace of work, and that soon the completed and thoroughly polished Osiris: New Dawn will take us on a space journey into the unknown. 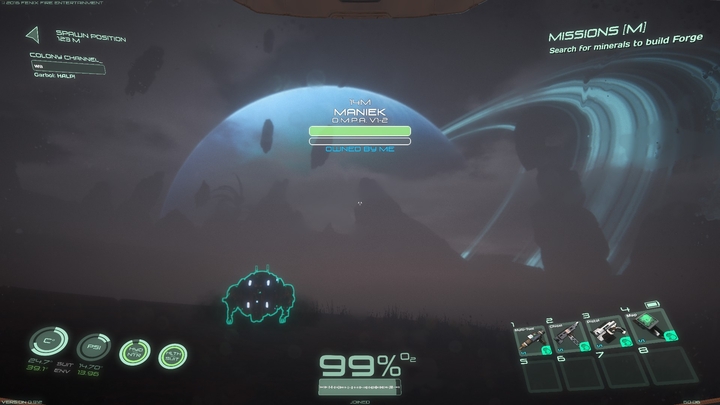 Such views never fail to leave an impression.