The mechanics can be well illustrated by a situation from the test version of the game in which the protagonist  by using an appropriate skill  pulls out a valuable object from the mud. While delighted by this discovery, his companions insist on continuing the journey. However, if we get stubborn at this point and repeatedly choose an option ordering the protagonist to remain by the mud in anticipation of another item "appearing" there, this will finally happen (whats more, the object will be useful later in the game), stunning the companions even more. Polishing and developing all the side interactions to such an extent would make Tides of Numenera an extremely complex experience, setting it on par with Planescape  or even surpassing it  in terms of content. And if we choose to believe the developers assurances, that's exactly what they want to accomplish. 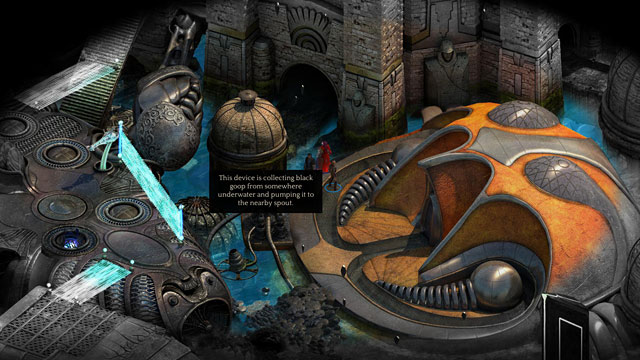 While the world of the new Torment lacks a consistent character, the environment cannot be denied some distinctive charm.

The spirit of the good old Torment can be seen in different areas as well  for instance, Tides of Numenera uses a very classic perspective (isometric view), placing three-dimensional characters in a two-dimensional, prerendered environment. The artistic direction chosen by the designers merges a fantasy world with elements of dirty steampunk; in the test version it was well-presented. Several fragments of gameplay featured both elements balancing each other (though fantasy remained the domain of the story-based aspect). The developers want to build the setting in a creative way  there will therefore be no shortage of phenomena that violate the laws of physics, complex mechanical structures, claustrophobic caves full of danger, or disturbing mazes. The current richness of the world gives hope for seeing larger levels full of even more interesting buildings, decorations and landscapes in the future (the studio seeks to provide an enormous universe to the players). The only thing I found annoying is the poor saturation of colors  the locations lack a color "theme", and so do the elements of interface, making it feel more simplistic and bizarre than it actually is. 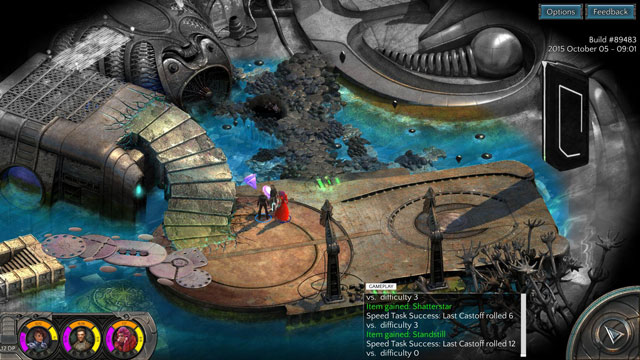 While relatively passive, the interactions with the environment can be quite engaging.

The last segment allows us to test the Crisis system which is a completely new (as compared to Planescape) element closely related to combat. According to the developers from inXile, the Crises bring in the spirit of pen and paper RPGs to their production, letting the players control the action with a freedom reminiscent of the way a "real" game masters issue commands. In practice, this means resolving conflicts with an opponent by combat or without bloodshed (it will be possible to complete the game without killing anyone). Whats more, starting a confrontation is not tantamount to choosing a road of no return. During the skirmish itself we can ease the conflict and even end it by relevant rhetorical tricks (enemies have no intention to abstain from the conversation  even if a few seconds earlier they tried to gut us). Building the fighting mechanics in such a manner is to give the player full control of the situation and let them deal with any "problems" in a total compliance with their vision. Although the tested alpha game blocked the option of choosing a bloodless alternative to a hostile confrontation (in order to showcase the combat system as such), the appropriate course of "conversation" with enemies ended with the player gaining information that the final version will feature a pacifist approach as well.

Torment: Tides of Numenera for PS4 turned out a pleasant surprise for our users - the current average score is higher than pre-release user expectations.