"Crossroads Inn is a real time management sim set in an original fantasy world of Delcrys"  proudly reads the description on the game tab on Steam. Having read that, I was expecting Delcrys to be vibrant place full of attractions that would complement the complex and thoughtful mechanics. I imagined wandering magicians, frequent random events, interesting details, and brawling daredevils. Unfortunately, in practice, the "fairy land", turns out quite boring, void of firm character, and resembling a completely default medieval setting. I honestly expected the devs to make the most of such a setting. Special events that appear from time to time, are unfortunately not so frequent as to ward off a sense of monotony that slowly but steadily creeps into the game. 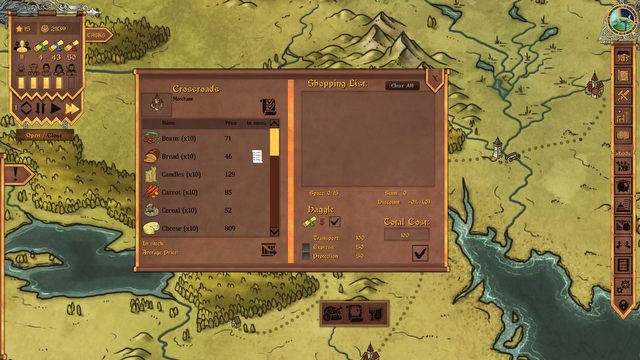 We obtain supplies in nearby towns and villages.

In other words, the story campaign is rather tentative. The ruler of the largest of the surrounding kingdoms called Yorevale, dies. Since he leaves no heir to the throne (his children parted the world in unclear circumstances), the king's successor has to be determined by election. Several powerful personalities compete for the crown (they're all cartoonishly exaggerated, which I didn't like a lot), and we enact the owner of the Inn  a young man with unclear origins, who will play a very important role in these events. Right at the beginning, we understands that this story won't be one to remember. However, it does work well as an additional incentive that motivates the development of the inn and gives us concrete tasks to accomplish. I think the entire game would benefit from it, if the devs allowed the players to discover some of the things themselves during the game  such as the identity of the protagonist  which was revealed way back, right at the start of the crowdfunding campaign  prematurely, if you ask me.

The game also has a sandbox mode with several levels of difficulty. It should please those of you, who prefer complete freedom and don't need a plot to have fun with running things on a strategic level.

The audiovisual design is certainly one of the game's strengths. There's no fireworks in terms of visuals  there's not a great variety of character models, and an the color palette seems a bit dull, but that's nitpicking. Overall, the inn looks really nice, and setting things in motion is very satisfying. If you go to the graphics options, you'll be able to check an option that draws a thick, black lining around objects and characters, which gives the game a slightly cartoonish look. It's a matter of personal preference, but I opted for playing without it. 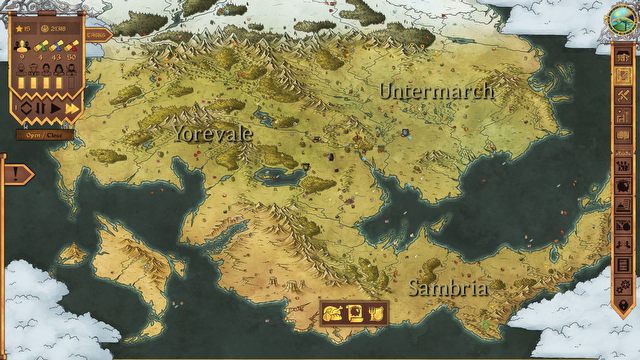 The sound design is also great, particularly the soundtrack was fun  it was actually composed by the same man who made music for both The Witcher 3 and the highly anticipated Cyberpunk 2077, i.e. Marcin Przybylowicz. The original score isn't very long in total, but the songs are really fit for the atmosphere. Some are really catchy. Check it out:

It's too bad that, at least some of, the characters aren't voiced. This could do wonders for the immersion, but I understand that it wasn't viable financially.

According to our users, Crossroads Inn for PC was a disappointment - the expectations before the release were higher than the current average user score.