Maggots, rats, oily stains  that's the bread and butter in every (dis)reputable inn, and it's not different here. The game comes short in terms of worldbuilding, but the foundations are solid, and you really can have a lot of fun. Unfortunately, this impression is disrupted by some of the annoying glitches, mostly related to the behavior of our employees.

The gloomy and rather formulaic fantasy world of Crossroads Inn is surprising, especially since the industry is full of very inspiring productions. Do you remember Majesty? The seemingly generic world was saved with humor that enlivened all those ordinary elves, dwarves and dragons. In Majesty, similarly to Crossroads Inn, we also didn't directly control the characters, but we felt really close to them. Oh, if we only got a game that would allow serving the upbeat characters of Majesty  or even Dungeon Keeper  in our inn, where we'd have to put up with their eternal problems, discontent and sassy requests... Well, not in Crossroads Inn.

Characters regularly got stuck on environmental objects  even when provided with adequate space to move around. I also noticed a few times the NPCs tried to fill the lamps with oil while standing on the other side of the wall from the lamp. The characters would often become stuck for good  reloading the game wouldn't help, and so I had to load an older save. You probably know how irksome that can be. At one point, about 80% of my staff were stuck in one place or another, unable to do anything, and meanwhile, the inn was full of guests in desperate need of fixing a drink. Worse still, most of them didn't get any rest at all, and I had to pay them back. I have no idea what the reason for this strike was, but fortunately restarting the game helped in this case. 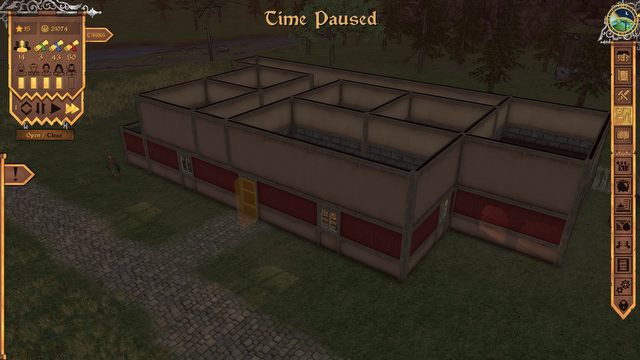 For a game about a tavern in a fantasy world, it all looks surprisingly gloomy.

Finally, I've also heard reports of problems with localizations of the game. The devs promised a German and Polish version to become available soon (it's likely that both are already up as you're reading this).

Which is the best inn in the village?

I would love to solemnly recommend this game  there's just something about it that makes you want to come back, and the hours go by unnoticed, one by one. But I cant really do it  mostly because the setting is so bland, the potential of it utterly wasted. Then, there are the issues with movement of characters. However, if you like economic strategies and your stats include a lot of patience, it's worth giving Crossroads Inn a shot. It's a solid game that just needs a few patches to become a really compelling experience.

I spent about 25 hours with Crossroads Inn. I mainly focused on the story campaign, moving it forward as soon as possible to evaluate the script prepared by the creators. However, I also found some time to play in the sandbox. I'm no stranger to economic strategies, but I usually prefer games that with a slightly larger scale (for example, Anno, or Frostpunk).

We've received a review copy of the game from Klabater, the publisher  many thanks.

According to our users, Crossroads Inn for PC was a disappointment - the expectations before the release were higher than the current average user score.