Let's build a stadium together

Now that we know how kicking feels, it's time to look at the game modes where we can test our skills. Almost none of them got any significant changes, especially Volta (which is the equivalent of FIFA Street first featured in FIFA 20 ) and the already legendary FIFA Ultimate Team, i.e. a real bonanza for EA. However, I'm quite delighted at how playing with friends was made more complex and rewarding in both of these modes. And even though I still haven't had a chance of competing with my friends on Stamford Bridge, nor the streets of Rio, I always welcome any attempt to make friendly sessions more accessible and fun.

However, all the remaining exploits (rather: lack thereof) in context of these two modes deserve criticism. It's a little sad that we could enjoy a pretty extensive story of Alex Hunter a few years ago, and right now we only get a rudimentary story in the Volta, which can be completed in mere 180 minutes. The only consolation is that the mode features players like Thierry Henry or Ricardo Kaka, the absolute legends. Of course, we can still enjoy dynamic gameplay with AI or other players while unlocking branded joggers in the digital version, but what's next? EA has given up on developing the Volta this year, and it's a sin because it's another thing that will likely fall into oblivion. 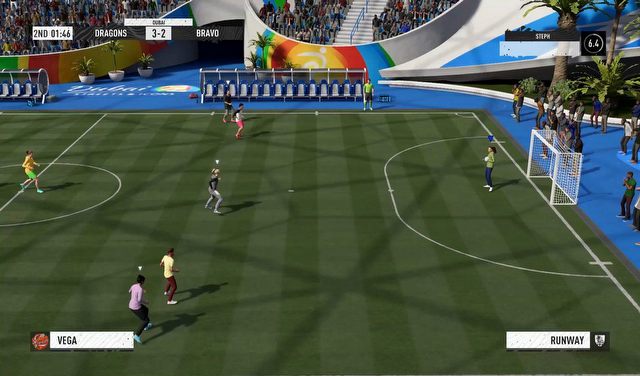 And Volta? Nothing new here.

As for the aforementioned FUT, I actually didn't expect any major changes, because it's rich in content anyway. Squad Building Challenges, lots of different tasks, Squad Battles, Division Rivals or online friendlies  there's plenty. Electronic Arts, however, decided to go a step further and introduced a range of cosmetic, pardon my French, BS to be drawn from packs. They all have to do with the personalisation of our club and stadium.

The big issue  after so many years, the fitness cards have been removed so that we can play matches without fear of fatigue of our players. A small step for the devs...

Initially, I even liked this addition  additional flags in the stands, a few logos, the ability to select your anthem. Most importantly, I'm not forced to get any of these  I might as well use a ready-made stadium. And? And that's cool  at least on paper.

My opinion changed dramatically when I opened one of the golden packs, to which required considerable time and effort. They usually contained rare players, even the contracts were ok, but this time, things went a little too far. The mainstay of this package turned out to be... fireworks. For displaying before the game. This further decreases the probability of obtaining valuable players. Just sensational.

I also can't help but wonder why the creators prefer to invest time and money into insignificant, albeit fancy novelties, instead of focusing on polishing the game from the technical side of things. At first, I thought it was all the fault of the preview version, but the game was released since, and the main menu still reacts with a delay (microseconds, nevertheless apparent), not to mention bugs such as inability to find an opponent (I don't think it's because of empty servers) or random freezes forcing requiring a hard reset of the console. Really, the frustration from getting my ass whooped on the pitch is enough. Why, dear developers, do you insist on making my life harder outside the virtual stadium as well?

It's nice to have a fancy stadium, but not at the price of legendary players.

AND HOW IS THE NEW PES DOING?

The new Pro Evolution Soccer gained some chastity through poverty. Konami announced it's doubling its efforts on next year's installment, which will actually be using the Unreal Engine. Hence, the recently released eFootball PES 2021 Season Update is just that  an update. The upside, however, is that we will pay a lot less for this game than usual, and we will receive a lot of gifts in the form of players supplementing our squad in myClub mode.

I've always loved playing in FIFA  not just matches, but also managing the team, scouting the transfer market, catching talent  all the things that the manager mode allowed me to do. This year, it received a few fresh functions that I really like. One of them is match simulation panel, which feels like Football Manager. The AI plays the game for us and we can make tactical adjustments and take control of the team at any moment. It can save time, but also a lot of nerves.

The little cherry on the cake is giving the players total control over the training schedule. We can choose the days where we do profiled workouts and also find room for a bit of recovery. In addition, every player can develop in the direction we choose. Fast strikers, for example, can become midfield conductors  it all depends on our whim.

But it's hard to limit yourself to single-player, as it's often a pain. That's because of the AI. The challenge is either completely banal, with matches ending in results more common in hockey, or it's not as much difficult as it is tedious. Taking the ball away from these passive bores is usually neigh impossible. An attempt to do away with the standard artificial intelligence duels is the competition mode. When turned on, the computer tries to mimic the behaviour of professional players and actually pulls off moves that circus performers would never dream of. The game is more enjoyable then, but definitely harder. Well, you can't have everything.

And then, we have to address a vital question. Why isn't this game a DLC? On the one hand, I understand EA's approach, but on the other, most subsequent installments in the FIFA series are half-baked (for theoretically full-blown games). It's the one series that truly should have become a game-service years ago; yet every year, we get another installment that brings some new elements, but it's usually nothing major.

Perhaps it has to do with the development of a next-gen version of the game, or maybe it's the minimal effort  maximal profit rule at play here. None of these options, however, changes the fact that the new FIFA is a good, satisfying game, one that can liven up a lot of parties, and put some more dedicated fans into a gaming trance again. The game will suffice for another year of playing, but we'd really love to see the series truly evolve next year. To see it finally meet the hopes placed in this series, realize the true potential of this particular video game genre.

It all started with FIFA tournaments played with my cousins. Those were my elementary school days. I remember I was perfectly happy with the lean editions of 13, 14 and 15 on PlayStation 2. From the age of seventeen, I began my PC adventure with FIFA Ultimate Team, which consumed me completely, to my mild regrets. This year I played PES for the first time since years to see what's up. I found it more compelling than FIFA 21.

I spent about 30 hours with the game, half of it in the pre-release version.

A copy of the game for review was received directly from Monday PR.

According to our users, FIFA 21 for PS4 was a disappointment - the expectations before the release were higher than the current average user score.