The army will make you a man

Soldiers are divided into classes, and these determine both the weapons and skills that can be used and learned. Let's spare a few words on character development  entering the game, I was surprised at how few XP my team would get. Specialization is a necessity, and even a few characters of the same class can have a completely different skill set.

You obviously end up caring for the heroes the most, but making sure the grunts are doing ok is pretty much mandatory. This is because we cannot use all our best soldiers in every fight, and when you delegate a character to a side mission, you can't use them in another. By the end of the campaign, you will certainly have learned to juggle the team members around. Here, we can observe another good design decision: you can freely assign weapon mods to less experienced soldiers  you can even do it right at the departure screen before a mission, and return the upgrades to their proper owners once the mission's over. 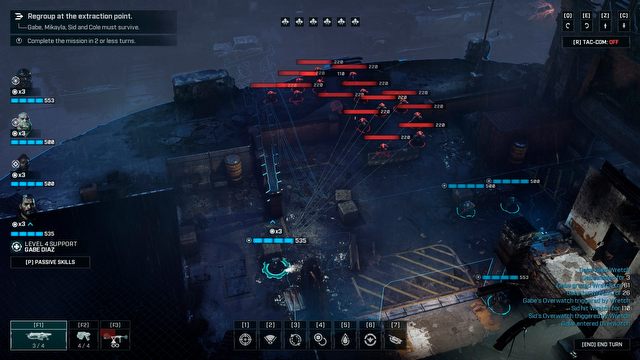 That's how it goes in the world of Gears Tactics.

The game is definitely missing a strategic module that'd let you research technologies or manufacture goods, and Gears Tactics is trying to make up for it with more extensive character development. Even simple upgrades of the equipment have to be obtained by meeting additional mission objectives or accessing caches scattered around the maps.

The story is very linear, and this may be considered a big drawback, especially for players raised on XCOMs. Story missions are completed in a very specific order and there's nothing random about them. The authors have tried to diversify the campaign with side missions, but these are rather irritating because... you have to complete them.

Initially, this isn't hugely problematic, since we can arbitrarily choose a single mission to complete and thus push the story forward, but in towards the end of the adventure, we already need to complete three such missions, which is all the more painstaking that they are all very repetitive. Escape a bombing raid, protect two stations, free prisoners, or just kill the enemies guarding a base  over and over again. This had been so irksome, in fact, that it compelled me to lower the game's overall score. These missions are completely redundant fillers and, on top of that, they're downright annoying  you're inches away from the grand finale, but you still need to complete some absolutely synthetic activities. 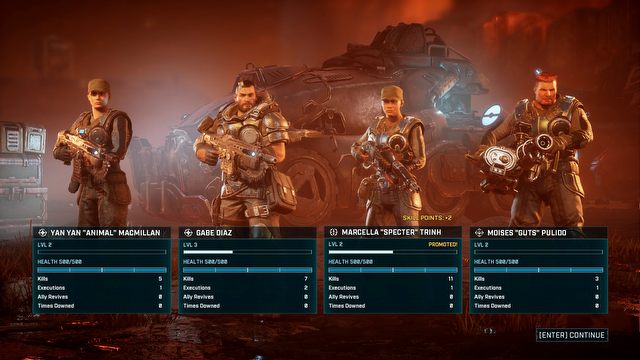 The team usually consists of four soldiers  there are missions, where we have just one character, too.

Gears Tactics could definitely use some technical polish. The game occasionally crashed to desktop, enemy movement was sketchy with stuff like looping animations and collision detection that was at best amusing. The first patch, released a good few days ago, addressed some of these issues  we already have been playing Gears Tactics for about three weeks, so a release-day patch is likely.

Tactical game for the reluctant

All in all, Gears Tactics is thoroughly enjoyable. It offers great, surprisingly intense fun, and you're guaranteed to spend more time with it that you'd think; yes, it is linear, but the subsequent missions make it worth it. Huge credit to the designers for the fantastic interface  it works great, and that's emphatically important in this kind of a game. This doesn't mean the game requires absolutely no getting used-to, but it's counter in minutes, rather than hours  navigating all the menus becomes instinctive after half an hour or so. If it wasn't for the irritating third act, the score would easily be even higher, especially since Gears Tactics has some great production values. Cut-scenes are very good, the soundtrack as well; audio-visual setting overall is pretty much flawless. 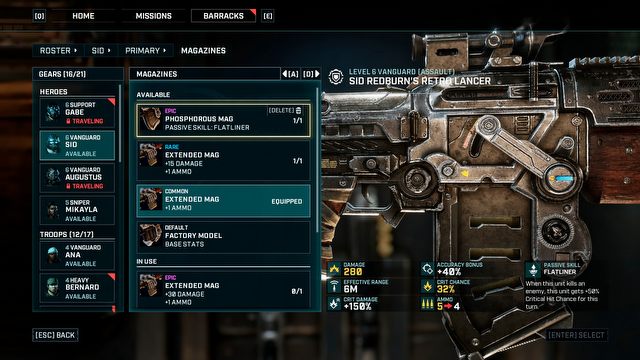 You can get a ton of upgrades that will allow you to take full advantage of your play style.

At the same time, this game requires the right mindset. If you're looking for an experience to match the original UFO or Terror from the Deep then be warned: this game is even less extensive than the latest entries of XCOM  a veteran of the genre should bear that in mind. Gears Tactics seems much more like the perfect introduction to turn-based strategies, a more approachable alternative for those, who wouldn't usually play tactical strategy. . And honestly, this is a huge advantage for a game in this particular setting. There's surely plenty of people who will appreciate the story simply because it's set in the universe of Gears.

I have been playing tactical games pretty much since 1994, when I first played UFOs: Enemy Unknown  Terror from the Deep is my all-time favorite of this genre. I played most of the entries in the series, including these from Altar Interactive.

We received a review copy of the game from Microsoft  big up.