Mario for a holiday full of challenges

2002 was a great year for players. We got WarCraft 3 and Morrowind. GTA: Vice City and the original Kingdom Hearts were both released on PlayStation 2. However, it was Nintendo that became the most successful. Metroid Prime remains one of the greatest games of all time, and The Legend of Zelda: A Link to the Past still impresses with extraordinary ideas and excellent execution. In this company, Mario's tropical detour seems less significant. It's unfair because it's a great, albeit difficult game. 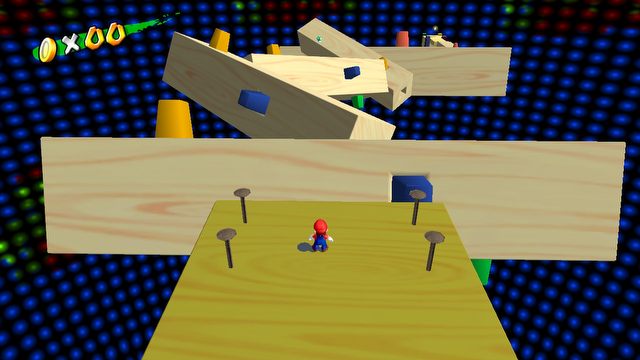 In Sunshine, an ominous Bowser is doing the worst thing on Earth  ruining everyone's vacation. And if that wasn't enough, the people of Delfino Island still blame poor Mario for everything. So, our hero has no other choice but to reveal the plot of the great tortoise (did you know Bowser is a tortoise?) and rid the paradise island of the sludge that floods it. This is done from the hub-city of Delfino Plaza, a place full of secrets, easter eggs and details so characteristic of Mario games  and so rare in other titles.

The F.L.U.D.D.  a water-powered robo jetpack  will help with clearing both Mario's name and the entire island. And it's this talking contraption that sets Sunshine apart from other shows. The creators squeezed the idea like a lemon, adding extra jumps to Mario's classic set of moves (there's even a rocket jump, because why not), flying, and combat mechanics utilizing a water gun. And the effect  as is usually the case with the Nintendo wizards  was perfect.

Super Mario Sunshine is perhaps the most chilled installment of the series. The tropical setting, beautiful, lazy music, and the wonderful palm trees all seem to yell: holiday! It's a playful contrast with the opinion that Sunshine sports among players. It is a hellishly difficult, even frustrating game. And there's a lot of truth to that. Sunshine is the perfect game for any player enjoying a real challenge  here, even reaching a designated place on a given map can be a challenge. More than once you had to stop and figure out how to reach one of the red coins, or climbed the harbor structures only to fall to the very bottom after a minor mistake. And when we fall into the abyss for the first time, because the robust native who's supposed to toss Mario over a precipice, does so in an awkward way  it's easy to get angry. 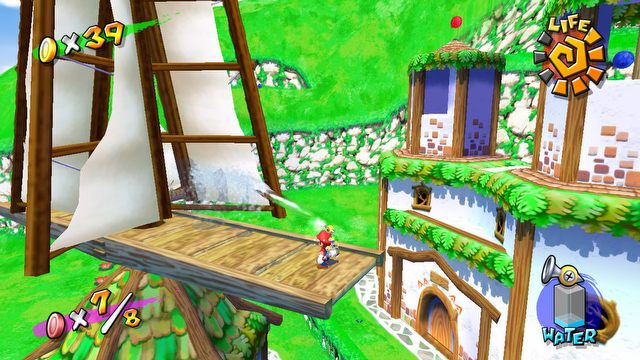 I praised Super Mario 64 for its precision and elegance of design. Unfortunately, Sunshine is less polished in these terms. There are no bugs per se (it's a Nintendo game, they don't do that kind of thing), but some sections are just frustratingly difficult. This doesn't change the fact that, with a little determination, the game gives an awful lot of satisfaction. I sometimes wanted to throw the Switch out the window, sometimes hammered the already faltering Joy-Cons (lack of glitches doesn't apply to that controller). But nothing can replace the satisfaction when it finally worked out. It's quite the same feeling you get in Dark Souls.

I'm fascinated by how fresh Sunshine feels today  and the game has just celebrated its 18th anniversary. Yes, the camera could work a little better, and the graphics are visibly old, but in fact, you can jump into this game headfirst almost without a hitch. How many games from 2002 can boast the same thing?