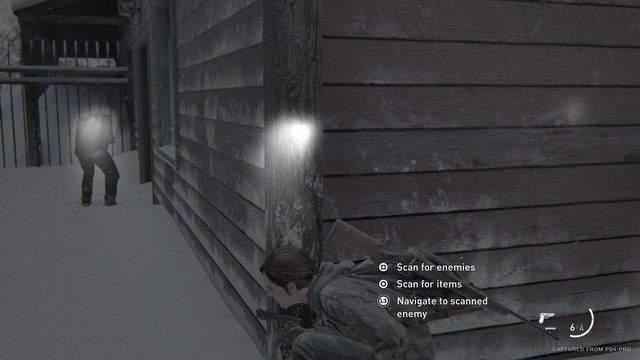 Naughty Dog took care of accessibility to a wide variety of players.

It's been five years since Ellie and Joel had their last conversation, near Jackson. Ellie is a grown woman now. Along the way, she lost the curiosity and optimism of a child  more often than not, she contemplated her inland empire and clearly enjoyed silence. Her mien became murkier, she got some tattoos (which are actually supposed to cover up bite marks). But we know that inside, underneath the stern mask of arid personality, hides a completely vulnerable soul, aching for love. Those few years of relative safety in Jackson partially allowed her to catch up with what coming of age means. There were new people in her life. Ellie starts entering relationships and looking for partners. Her friends, Dina and Jessie, are always around.

Joel works a lot  he and Tommy patrol the areas surrounding Jackson. It's not exactly idyllic, but it is far more secure here than in any other part of the country. Life seems to be taking its own course: children are born, people drink in pubs, there's a lot of work to get done. In the evenings: movies, parties or playing guitar. A small, civilized society taking shelter behind the high walls, trying to forget that the world outside has ended. 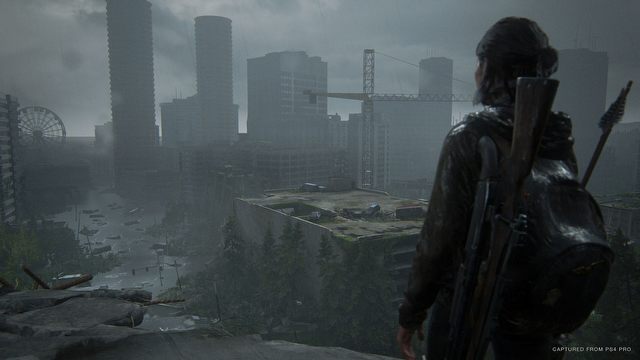 Seattle is rainy, raw and cold.

We presume this calm cannot last forever. And indeed, we soon set off through the devastated United States. The wintery backcountry of Jackson will be traded for a rainy Seattle, along the way getting caught in the middle of a conflict that doesn't really concern us. We'll have to chop our way through the zombies and the mad survivors. Your first instinct upon seeing something move better be getting a steady aim of the thing, rather than saying hello. Your cheeks will be sprinkled by the blood of the people trying to kill you as often as they're lashed by the rain. You'll gasp, scream, and agonize. You will take lives, not only in self-defense. If you loved the protagonist of the original, portrayed by Ashley Johnson, your head is gonna spin. The fate of Ellie  a girl raised during time of contempt  will move even a heart of stone.

I can't tell you what forces Ellie to go. I can tell you that the prologue is longer than expected, and even though it may feel like it's dragging on, it perfectly sets things up for the entire dram of part two. The protagonist feels a lot less harmless compared to Ellie from the latter stages of the original, when she and Joel got separated. 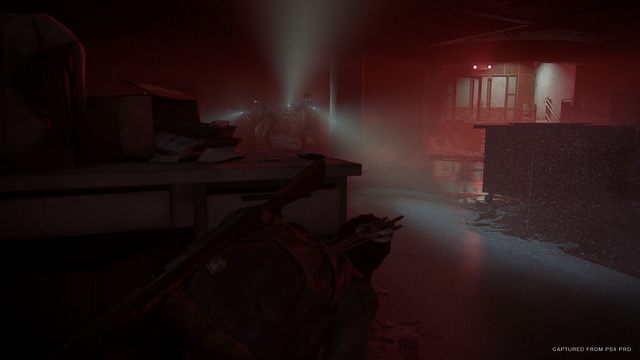 The infected love these places.

Now you see me, now you don't

Ellie's nimble and agile, she's fast  she's flying. She can swim, too (which is a must given the circumstances). The difference between Ellie now and six years ago is colossal, and it's great that it's so pronounced in the mechanics. She's strong, more than able to take on grown men. She's as capable as Joel, but way more flexible.

The protagonist is also better-suited to a stealthy approach, enhanced with a new posture  prone. We can quickly switch between different postures, hence improvising our way around the environment, hide underneath trucks or in tall grass (which looks awesome). While prone, we're also able to shoot and craft (the idea being, I assume, that it's possible to open your backpack while lying on the ground). Occasionally, we have to swing on a rope, leap over a precipice, swim across a rapid torrent, or jump over various obstacles. And that's basically it  the rest roughly corresponds to what you know from part one.

All right  there's also an elaborate mini-game. Joel taught Ellie how to play the guitar, and at certain points in the game we can actually play a few chords using the touchpad. It's a nice change from shooting zombies  and quite creative at the same time, because it kind of seems prone to improvisation. I'm already looking forward to Ellie playing the ABBA's Dancing Queen, or Last Christmas Wham!

But back to the point: we usually engage in combat from hiding, and the level design actually promotes stealth with conveniently placed hobjects (hiding-objects, just coined it) and crack which we can squeeze through. Open combat, though possible, is more challenging  ammo is scarce, and runners are able to brutally break our combos, which requires us to make more use of dodging. Ellie still carries her inseparable knife, and she makes good use of it (the blade doesn't break, so killing clickers is easier). When it comes to firearms and other weapons, we have the usual set: pistol, shotgun, revolver, bow (which now works a little differently), as well as the indispensable bricks and bottles. Ellie also learned how to make improvised silencers for guns from cans.