Traveling can teach you a great deal, but tourism stupefies.

It was scary. I was a stranger in a strange land  insignificant and alone. The universe was just so big, was there ever going to be a place I could call home?

Everything in this game revolves around traveling. Wanderlust is a praise of the journey, but not of tourism. These are not stories about airline promotions and getting tanned in tourist resorts. These are, most of all, stories about human nature during a journey  the central figure is the traveler. In that sense, Wanderlust glorifies travel as few games out there, while at the same time presenting a critical attitude towards our customs, which, when pushed to extreme, result in situations that are at once amusing and terrifying, often leaving the locals perlexed. 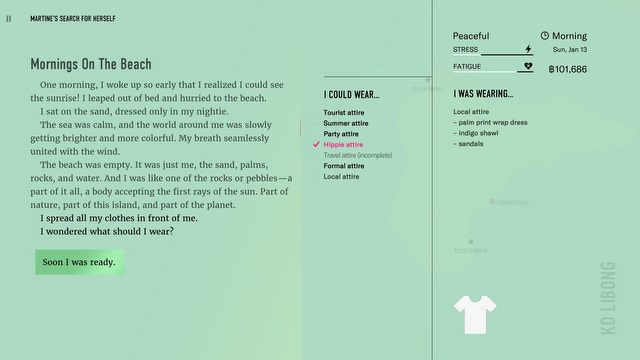 In Martine's story, you will have access to a simple clothing panel (you can buy clothes in stores).

You could argue that there's a great many games, in which the journey takes central importance, and which are also more spectacular than an interactive book. Sure, Uncharted, Tomb Raider, and even Assassins' Creed allow us to visit meticulously designed locations; there will be moments when you will stop chasing after better armor to enjoy a nice sunset, or some other vista. But it won't be long before you're back to emptying your AK-47 clips, shooting bad guys, throwing grenades around ancient ruins and speed running across rooftops of houses that predated Christ. Even in games, in which the journey is the centerpiece of storytelling  the Siberia trylogy, for instance  the destination and the end result is still more important. After all, we have to complete the game, reach the goal, realize all mission objectives. The journey still isn't the purpose in and of itself, it's just a way to achieve the ultimate goal, and thus  some kind of a reward.

When we play a good RPG, we painstakingly climb a big mountain because we expect to find some tangible reward there, rather than just to climb it. In Wanderlust we will climb this mountain only because you can see other, even bigger mountains from the summit. 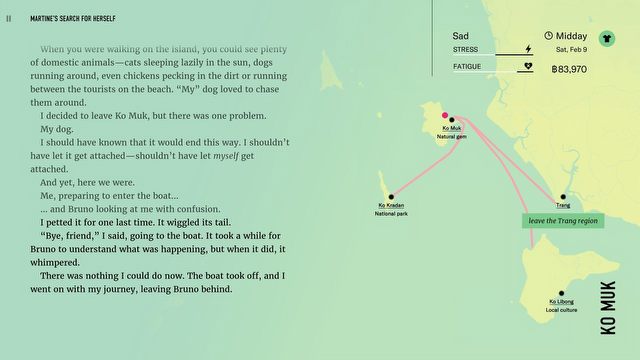 The game often lets us decide where to go next.

The worlds prepared for us to explore in the big, AAA games are nothing more than levels in which, within the safety of the framework prepared by the devs, we pursue predetermined goals. There's indeed no journey  only tourism. And we, as we enact Nathan Drake or Lara Croft, are merely tourists visiting a perfectly safe and well-designed resort.

Meanwhile, Wonderlust bucks this trend. The only real goal is the journey. Its process and duration, the challenges it poses, and the change that happens within us throughout the trip. We can't die. We can't fail a quest. There's no powerful boss at the end, nor cut-scenes that would sum up our heroic achievements. There's only  but not merely  the tale of a person; walking, sailing, or flying, even though nobody tells them to. Here's a game with no objectives. Because the mission is simply to travel.