Modern Warfare became notorious even before the release, with the announcement of unsettling missions similar to the infamous "No Russian" opening of MW2. Did it work out? Overall  yes, but not on every front. The devs didn't go all the way; we don't shoot civilians or children, for example. If we do that, we'll have to reload from the last checkpoint. There are a few moments where we move among a frenzied crowd, bullets whizzing by at random, and then, collateral damage isn't punishable. But it's not really a "grey war," where telling friend from foe would not be obvious. 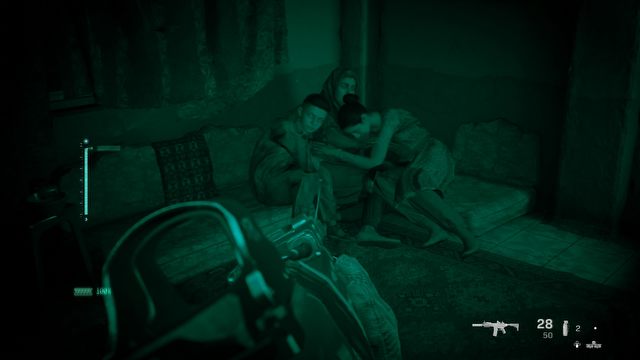 In Modern Warfare is full of shades of grey. Can't be sure about anything.

NO NORMAL OR EASY!

Remember to play the night assault missions at the highest level of difficulty, without any user interface. This critically improves immersion and feel. Every step forward, every lean around the corner, and every shot will make a huge difference. No need to be afraid of endless waves of enemies. It's all about atmosphere and tension  just like the first Rainbow Six and Ghost Recon games. Going through them on easy or normal will take all that away.

So while such stages are featured in the game, but just briefly, in two missions based on the book Operation Geronimo and the movie Zero Dark Thirty, which depict the famous raid for Bin Laden's headquarters (he was the leader of Al-Queida). Then, you really can't know what to expect behind the next door. We walk in silence down a narrow corridor, a baby whimpering in one of the rooms. We pry open the door with force  inside, a woman throws herself on a bed. To grab a rifle, or to protect her child? You have to decide in a split-second. In such moments, the new Call of Duty sweeps away all FPS competition. It's worth playing the game even for these moments.

To top it off, the developers have also portrayed Russians as completely aggressive and ruthless oppressors. Russian soldiers in Modern Warfare shoot unarmed civilians and children, relocate women so that "terrorists can't breed," torture prisoners, and attack entire communities with chemical weapons. Some respite is offered by the fact the good guys aren't that good, too. If that's what the mission requires, even the most positive characters will become merciless. There are no saints in the world depicted by Modern Warfare. Against the backdrop of ubiquitous political correctness in games and beyond, the new Call of Duty boldly bucks the trend. 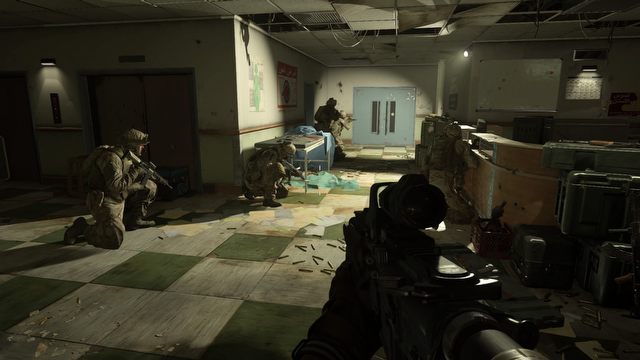 Minimalistic HUD turns on only in some situations. Works great for immersion!

Alright, and how does the new CoD feel as a game? Very familiar, on the one hand, and on the other  a little different. It is still a dynamic action game  full of scripts and truly cinematic moments. The character is a little slower, you can feel its weight more, and the movement seems more authentic overall. The new shooting model works out great  in this respect, this Call of Duty brings quality that's superior to anything the series offered so far. Supporting the weapons on elements of the environment is both useful and convenient, and the new recoil and reloading animations are very realistic. Each projectile has huge power, but it can be felt only when the creators want it, because in the campaign, it's not possible to switch the fire mode at will. Which is a bit baffling.

The developers also made sure that we are constantly doing something new, something fresh. One moment we're shooting, then we're carrying bricks. Veterans of Modern Warfare will sure be reminded of many moments from previous installments, since we will see many situations that reference some cult missions of the trilogy. The new engine delivers, but mostly in smaller locations where everything's near us. The textures are realistic, as is the lighting and the level of details of characters, gear, and elements of environment. Anything further away looks a bit off, and the scenery makes average impression  at least on PlayStation 4. Can't complain about audio, though! A barrage of loud shots, separate sounds for each falling casing and other noises, or even radio dispatches during firefights make for an amazing experience.