The general impressions from the multiplayer will, however, depend on the chosen map, mode, and the number of players. The venture into Battlefield territory, with 64 players plus vehicles didn't exactly turn our great. Ground war is a mess and an arena for humiliating newbies (see frame). The less players and the smaller the map, the better the experience. Currently, probably only one map, the bridge on the Euphrates, continues the tradition of maps with three main movement corridors. The rest provide much more possibilities, and all of them, apart from the sterile and seemingly unfinished Piccadilly in London, are full of details and almost palpable grime and mood of a battlefield. 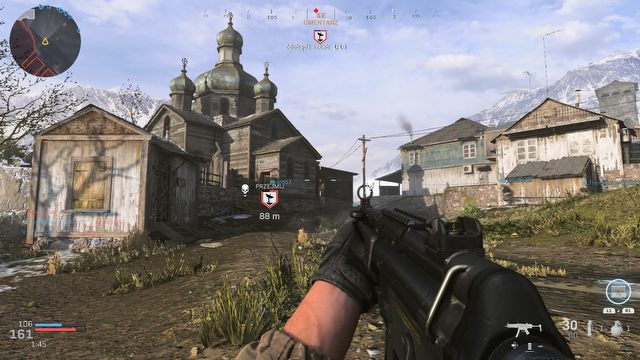 Map design is overall much better than in any previous game in the series.

The hopes were high, but already the beta-tests revealed that Infinity Wards is barely making its first, blind steps in the 64-player conquest mode. In fact, the way things are now on the maps of Ground War is basically a mess. On one map, players hide from killstreaks in the buildings in the center of the map, while the rest besieges the flanks with sniper rifles and vehicles. On another, typically urban map, the more resourceful players camp on the rooftops, firing their sniper rifles at the players on the streets, who are probably beginners expecting a fair fight.

The balance of vehicles and killstreaks doesn't work, the respawns are problematic. This is basically an excuse to have a laugh with your friends and gather up some frags by exploiting the maps, rather than play atmospheric, rewarding battles. Don't get me wrong, this is a step in the right direction by Infinity Ward. For now, however, they're nowhere near Battlefield in terms of level design. 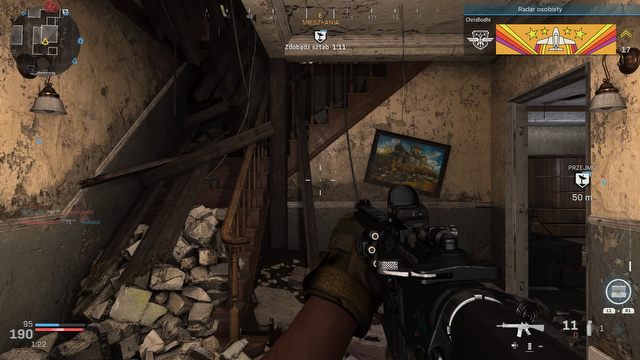 The war is very apparent.

The most balanced games in the new CoD are probably 10v10 battles on slightly larger maps. They're dynamic enough, and manage to give you enough time and space to make decisions at the same time. There's less senseless running and waiting for players to cross your line of shot, and more strategy and observation, especially in the modes that require attacking or defending specific locations. And if you want to completely avoid chaos altogether, you can always focus on strictly skill-oriented 2v2 shootouts. There, you always know where the enemy will come from, and how many of them there are. It's somewhat intense, and the competitions is certainly there, so it's best approached with a trusted comrade. My personal favorite was the highly immersive mode without the HUD, on night maps. Gameplay is definitely slower and the atmosphere's thicker.

What worries me a little bit is that this part of the game is subject to constant changes. I really dig the atmosphere of a realistic firefight, but I could already see neon-colored weapon skins appear. The decision is obviously daft from the logical standpoint  wearing a skin like that is like shouting "I'm here! Come and shoot me!" but it seems this is an inseparable element of modern shooters. The implementation of micropayments remains an open question. You can unlock skins and add-ons by completing game challenges, but the watch that provides additional features is only available in a paid pack. We just hope the developers will support their game over the coming year sensibly, paying attention to what works and what doesn't. 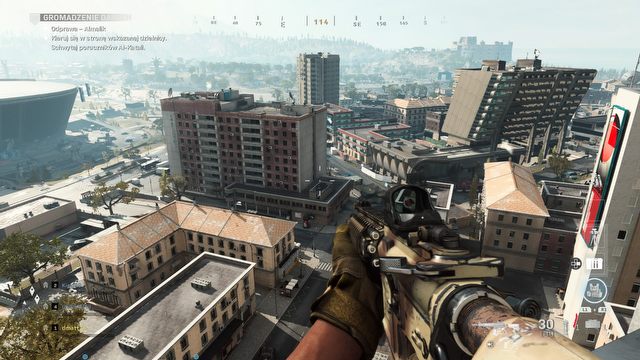 WILL THE COOP SURVIVE?

There's also a four-player coop, but so far, I can't see it becoming wildly popular. The very idea of referencing the plot of the first Modern Warfare in multi-stage raids with specific goals seems interesting enough. It's based on the zombie modes from previous games, but it still requires some polish. Completing the whole operation with random beginners is pretty much impossible. The difficulty is high: flawless communication and the right equipment management will be mandatory. But even if the team is strong, the game is keen on spawning enemies on flanks or behind you, which can effectively nullify any strategy. There are bullet sponges, too  the armored colossi  and you can never be sure how close you are to defeating them. There's plenty of potential here, there are some fun moments, like the shootout in a plane that's taking off, but on the whole, it has to be refined.

Possibly the most underwhelming mode is the survival, and if you were scolding Sony and Activision for making this mode exclusive for PS owners, there's not much to regret here. Shooting waves of enemies and buying the best weapons for this quickly gets boring  because it's so repetitive. Coop modes are also no good for getting XP  it's much more efficient to play regular multiplayer deathmatches.

Regardless of these few flaws with all these Modern Warfare seems a game from a different universe against the backdrop of Battlefield V, Breakpoint, Siege, or The Division. The multiplayer reminds me of older games, such as Battlefield 2 and 3, or Medal of Honor 2010. War isn't romanticized in the campaign, the atrocities and uncomfortable, morally unclear situations are bread and butter here. This is a game that finally has the courage to be mature. It sets the bar high for all subsequent war productions  including the upcoming Black Ops and other titles in the Call of Duty franchise. This is actually exactly how I imagined games signed with Tom Clancy's name  and it came from the left wing. Call of Duty is back at the top, and is currently the best single and network shooter on the market.

I spent about 25 hours in Call of Duty: Modern Warfare, 6 in the campaign, on a mixture of normal and hardest difficulty levels, and the remaining time in various multiplayer and cooperation modes. The game brings the best campaign in Call of Duty since the first Black Ops, as well as the most diverse and atmospheric multiplayer. The game is still short of a perfect score, but this release could mark the beginning of a brand new future of the series. I am a great fan of all the "realistic" installments of Call of Duty, and a sworn enemy of all the futuristic iterations of CoD. The new Modern Warfare is the first CoD in years that I can finally buy in good conscience and not feel disappointed about.

We've received a review copy of the game from Kool Things, who cooperate with Activision, free of charge  many thanks to them.