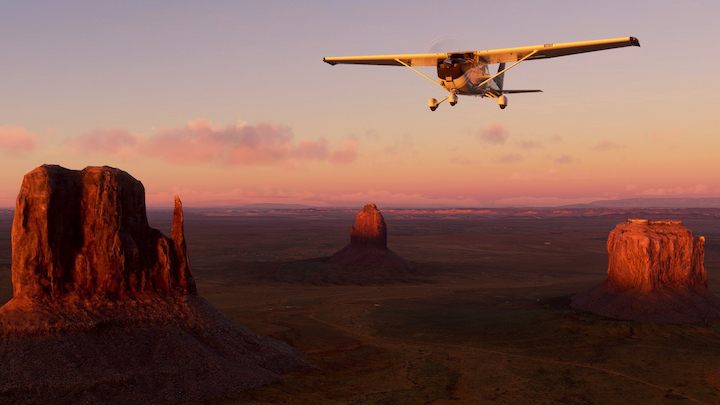 What is Microsoft Flight Simulator about?

MFS 2020 is a comeback after years, a comeback of one of the most famous and probably the oldest series of PC games; however, the word "game" must be taken with a grain of salt. The Flight Simulator is in general not played  you can't win, unlock, beat anyone or finish a plot. You simply fly  and that's it! So much and so little at the same time. We choose the aircraft, the route, and fly, while testing our own skills in piloting the machine, navigation, and use onboard instruments. And since we've got literally the entire world at our disposal, every town and airport on the globe is available to fly to.

The developers not only recreated the whole globe, but also made an effort to make it look like it does in the reality (to some extent) by using satellite images, photogrammetry and live data downloads from the "cloud". Thus, the "mission" of finding your own home became a standard among players. On top of that, we've got a broad range of aircraft to choose from light aircraft and agile aerobatic planes up to passenger giants such as the Boeing 747.

What can you do for a hundred hours in the Microsoft Flight Simulator?

Board a random plane, not care about the luggage, not care about the ticket. Watch the world below... Microsoft Flight Simulator allows you to relax and enjoy the views. It's like Netflix travel videos  we choose a place in the world and after a while, were there. Oh, right, I almost forgot: You can fly around the whole planet. Taking off from small airports and doing just a few hundred kilometers at a time, we might need much more than a hundred hours to see even a fraction of the globe.

For aviation maniacs, theres also the necessity of operating navigation, autopilot, and other aircraft systems. You can practice to perfection various procedures or flights in bad weather. The simulator is also updated on a regular basis: there are free of charge and paid add-ons as well as fan mods. It is a project for the indie creators for at least the next 10 years, some... 87,600 hours.

Depending on who I ask, Microsoft Flight Simulator can be presented as a game for 100 hours or a graphic benchmark for a 15-minute computer test. Both are true in their own way, and the former has additional dimensions. If you are fascinated with aviation and simply exploring the virtual world, it takes a lot of time to master all the machines in MFS. This is how the first hours of the game usually go by  to learn and check how our e.g.: family house, has been featured in the game.

I searched for something more after this familiarization period. I dreamt of a career mode for a pilot and my requests were heard  in October one of the fans released a free-of-charge NeoFly add-on. With this external extension of the game, I can manage my own airline, airplanes, pilots and perform various types of missions  starting with rescue missions to cargo missions or passenger ones. A boring flight can be interrupted by a machine failure, and a night landing at an aerodrome can provide an extra burst of adrenaline. Everyone who drove a lorry in ETS2 knows, that such a gameplay mode, enriching the simulation part, can effectively keep a player busy for a long time.

NeoFly is not the only add-on to MFS, but it is free, intuitive and at the same time frequently updated. This is for me now the essence of this game  my aircraft, the entire world, and a list of various tasks to complete.

However, if you are a lover of top-class realism and perhaps you want to turn the hours spent on playing into an actual pilot's profession, it is worth trying to fly on VATSIM. It is a community of virtual pilots flying online, which is based on realistic communication with air traffic control. On VATSIM you will find the biggest enthusiasts, this place is only for eagles.