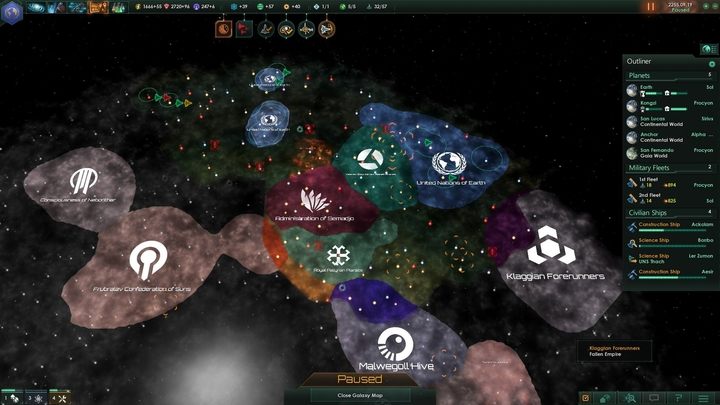 You can simply do anything in this galaxy.

Ladies and gentlemen, the time for final fanfare  the first place in our ranking means that the title of the best strategy game of recent years goes to the... Stellaris! Thus, for the last time we return to the works of Paradox Development studio.

Probably, it makes no sense to describe in detail the gameplay mechanics and explain why Stellaris is currently the best (at least in our opinion) representative of the recurring 4X genre. However, it is important to explain why this game is the best strategy of recent years.

Stellaris is a truly successful sandbox that delivers almost everything we expect from a strategy game in a perfect way. Starting the conquest of space, we choose one of several unique races or create our own from scratch, and its character and properties are limited only by our imagination. It gets even better later, game throws us on a map of the galaxy, which is a closed and coherent system  this one is almost alive and responsive to our actions.

Smaller factions form defensive alliances, giants make fortunes on star trade from rare raw materials, and races whose ideologies are very distant from each other are fighting endless wars.

Stellaris has unlimited potential to serve incredible stories where our ship commanders make careers in war campaigns, become leaders of nations and die in conspiracies just so that their successors have a good reason for revenge. Importantly, Stellaris seems to have a slightly lower learning curve than its historical cousins. To have fun with this title, you need to take some time to understand the game systems, but it's much easier than with Hearts of Iron IV or even Crusader Kings II. It is worth noting that we will get the full experience of the game's magnificent galaxy only if we purchase additional expansion sets.

The Swedish developers have succeeded in this case. They have delivered a game, which many creators of electronic strategies have always dreamt of. They provided a complete engine to support our imagination. In their work, each character has its own history, each race has its own goals, and each event has its own unique consequences. We have a living galaxy at our disposal, which we can conquer, explore or save from extinction  it's all up to us!