3. The Lord of the Rings: The Battle for Middle-Earth

If you're wondering why we proceeded to the podium right after the 5th place, I hasten to explain that the next two games scored the same number of points in our editorial vote. The first one is the Battle of Middle-earth, which once was a dream-come-true for me. It gave me a chance to take part in the war for the Ring, on an unprecedented scale.

To this day, I remember analyses of the announcements on the web and in game press, imagining how wonderful it will be to finally get our hands on this title. Not only did BFME allow you to move to Middle-earth to re-experience the events of the books and movies; it also allowed you to check an alternative version of the story – one in which evil wins – enriching all these adventures with great graphics (which still looks pretty good overall). 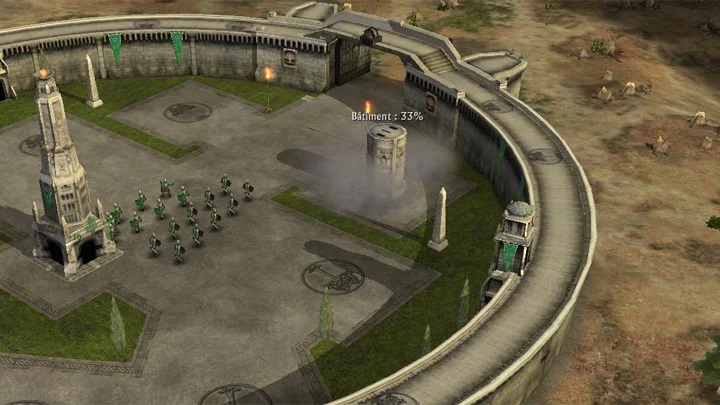 The evil campaign seemed more interesting to me than the good one – that's why I usually started with it. Source: EA.

The Battle for Middle-earth definitely lived up to the expectations, although it was not without some minor hitches. For me, the greatest ailment were repetitive missions, especially painful if you created so powerful an army at the beginning of a given campaign that it was able to easily – with proper management, of course – win virtually every battle. This led to a bizarre situation in which a series of missions involving the destruction of all enemy camps were carried out in a single, not even very inspired, stretch.

I'm whining a little, sure. In retrospect, I dream of a game that would allow me to go through the well-known events without having to tick off repetitive side activities (at the same time with a decent army, of course). As a result, the return to the Battle for Middle-earth can tire quite quickly today. This problem was largely fixed in the part two, which, however, told a story that took place in other parts of Middle-earth, only referring to the War of the Ring at times. This aspect of BFME 2 – very interesting, by the way – didn't appeal to everyone.

THE LORD OF THE RINGS: THE BATTLE FOR MIDDLE-EARTH – MODS FOR MODERN FEEL

The servers of both parts of BFME were shut down a long time ago, but the games are kept alive by fans who have set up their own network infrastructure and developed a number of projects to improve and expand the content of these games. In the case of the first part, the most important of them are: